China, an important market for Apple products and critical part of its supply chain, has been rocked by the outbreak 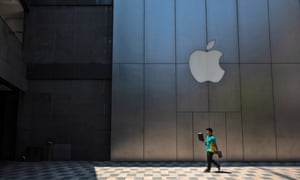 Sales of the iPhone 11 propelled Apple to all-time record revenues and profits for the final three months of 2019, a strong performance that comes amid concerns over the impact of the coronavirus on the Chinese economy.

Apple’s $91.8bn in quarterly revenue topped analyst expectations thanks to $56bn in iPhone sales. The strong performance marks a rebound for the company, which suffered a rare setback in holiday sales one year ago.

On a call with investors, the chief executive, Tim Cook, faced questions over Apple’s reliance on China, as that country is rocked by the outbreak of the coronavirus. China is both a market for Apple products and a critical part of its supply chain.

“We’re closely following the development of the coronavirus,” Cook said. Apple said it had set a wider than normal guidance range for the next quarter, of $63bn to $67bn, due to what Cook deemed “greater uncertainty” related to the outbreak.

The company has also restricted employee travel to “business critical”, closed one retail store in China, and restricted hours in other stores in order to institute additional precautions, such as deep cleaning and temperature checks for staff.

Cook said that Apple is working on mitigation plans to make up for some suppliers that are based in the Wuhan area, where the outbreak is centered. It will also have to deal with delays in production from suppliers in the rest of China, which will return from the Lunar New Year holiday later than expected due to the outbreak.

Apple has worked over the past year to diversify its revenues and avoid overreliance on the iPhone, but the device remains the foundation of the company’s business, accounting for 60% of revenues.

Earnings per share of $4.99 and net income of $22.3bn also marked all-time records for the company. The stock price jumped 3% in after-hours trading in response to the strong showing.

Among the sectors that Apple is hoping to expand is subscription services. The company’s new streaming service, which it hopes will rival Netflix and Amazon Prime, launched in November. Cook said the service was “off to a rousing start” on a conference call with investors, but did not disclose any specific subscription numbers for the nascent product. Instead, he highlighted award nominations garnered by actors on some of the channel’s shows.

The company recorded 17% growth in revenue from services, to $12.7bn, slightly below analyst expectations.

“This miss could be attributed to the competition from Disney+, which launched at roughly the same time,” said the eMarketer principal analyst Yoram Wurmser.

Wearables have also been an important driver of sales for the company. Toni Sacconaghi of Bernstein Research estimates that Apple sold $6bn worth of the wireless earbuds AirPods in 2019, and projected that number to double in 2020.

Revenues for wearables, home and accessories products grew 37%, to $10bn.

“This product category is now the size of a Fortune 150 company,” Cook said. 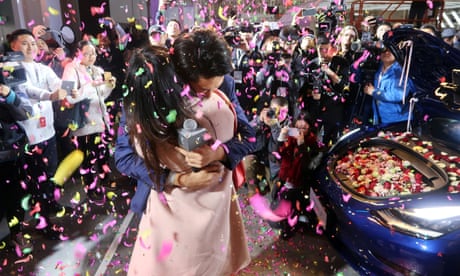 War, virus, recession … nothing can stop the tech giants from growing

Apple’s stock price had an extraordinary year, more than doubling since this time in 2019. That is despite its complicated relationship with the Chinese market in recent years. An economic slowdown dampened demand – forcing the company to issue a profits warning in January 2019 that shocked investors and sent its stock price tumbling. The company has also had to navigate the trade dispute between the US and China, and its reputation suffered in October 2019 when it removed a mapping app that was used by protesters in Hong Kong.