BlackRock gets praise for coal divestment. What it really needs is regulation

For the world’s biggest fund manager and its fellow shadow banks, self-policing can never be sufficient 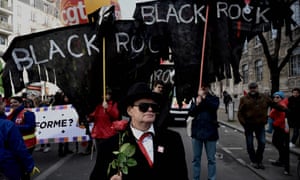 Let’s not beat about the bushfires. It’s not the impacts of climate breakdown on our ecosystems or the world’s poorest in the global south that worries Larry Fink, the CEO of that financial behemoth BlackRock. No, what really worries him and his shadow banking peers is the “fundamental reshaping of finance” threatened by climate protesters, and what this means for his company’s interests.

Fink made headlines this week with his annual letter to CEOs, which put the climate emergency front and centre. Acknowledging the risks that it poses to markets, and announcing that his fund will no longer invest in companies that generate more than 25% of their revenue from thermal coal production, his letter was hailed as a landmark move. But, before we get too laudatory, it’s worth asking: what is BlackRock?

The US company is the world’s biggest asset management fund. 63% of the staggering $7tn financial assets it manages originates in the Americas and 29% in Europe. In the UK (as far as we know) BlackRock manages £16.5bn of local government pensions, as well as at least £3.8bn of Transport for London’s pension fund.

BlackRock’s management of our savings takes place largely in a globalised sphere known as the shadow banking sector. In the past, most savings were placed in carefully regulated high-street banks and other savings institutions. Today, many of these functions have migrated toward shadow banking.

This sector is made up of institutions (including pension funds, insurance companies and hedge funds) that use securities (a tradeable bundle of debt or equities) as collateral in a modern form of credit creation. BlackRock, backed by $7tn of the world’s savings, also provides traditional banking services across the international financial system. Asset management funds such as BlackRock operate beyond democratic borders and are not subject to the same regulatory oversight as traditional banks.

In his letter, Fink acknowledges that “the money [BlackRock] manages is not [its] own”. “Last September,” he continues, “when millions of people took to the streets to demand action on climate change, many of them emphasised the significant and lasting impact that it will have on economic growth and prosperity – a risk that markets to date have been slower to reflect. But awareness is rapidly changing, and I believe we are on the edge of a fundamental reshaping of finance.”

But the “shape of finance”, especially in the shadow sector, remains essentially the same: it spews out massive quantities of credit – forms of new money – much of it aimed at speculative activity. The Financial Stability Board reckons that at the end of 2017 shadow banks generated $184tr in financial assets. This money is then used to invest in the real economy of consumption and production – and in the fossil fuel sector. As Bill McKibben, leader of the campaign group, 350.org, writes, without asset management companies such as BlackRock, “fossil-fuel companies would almost literally run out of gas”; what’s more, the company is the “world’s largest investor” in coal, oil and gas companies, and in those “driving deforestation”.

When it comes to growth versus green, the short-term view always prevails

While it is significant that Fink has publicly acknowledged the risks that climate breakdown poses to his and other companies, that is surely not the only point. The real concern is that the world’s politicians and regulators have allowed this behemoth to scoop up our savings, while turning a blind eye to how those savings are managed. This, in turn, has fuelled the creation of vast amounts of credit and debt, which has made the global financial system unstable and fragile. The shadow banking sector is much, much larger than it was after the Lehman Brothers collapse – a collapse precipitated in part by Lehman’s activities in the shadows.

If we are to save the planet, then we must begin by switching off the giant tap of unregulated credit. Fink is right: a “fundamental reshaping of finance” is what climate protesters want as the order of the day. But self-regulated divestment is not enough. The “reshaping” needs to be democratically enforced and accountable. We must ensure that companies such as BlackRock are brought back down to Earth and properly regulated by public authority. We have to do this if we are to redirect investment into the transformation of economies away from their addiction to fossil fuels and into more sustainable transport, energy and land-use systems.

• Ann Pettifor is director of Prime: Policy Research in Macroeconomics and a fellow of the New Economics Foundation