Boxed in: Amazon refused to take back unwanted delivery

Tony Harding, 79, was left with a heavy exercise bike he did not order and told he would have to dispose of it himself 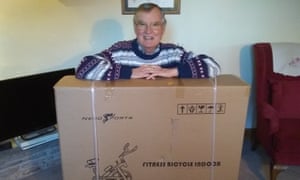 Apensioner from Bristol has described his disbelief after Amazon delivered a 28kg (62lb) exercise machine he had not ordered, and then flatly refused to take it away – leaving it blocking his front room.

Tony Harding, who is 79 and unable to move the heavy item, says Amazon effectively abandoned the giant box in his and his wife’s Winterbourne home, apparently expecting him to dispose of the brand new exercise bike himself. Despite asking both the driver who brought the item, and a second driver who delivered the order he had been expecting, neither would take away the £149 machine. Customer services told him it was highly unlikely the company would come to retrieve the fitness bike, and he would have to dispose of it.

Harding, who says he rarely uses Amazon because of concerns over its tax affairs, says he “held his nose” in January and ordered a 20kg bag of reconstituted logs.

But he got more than he bargained for when the driver arrived with an enormous box, wrongly bearing his name and address.

“When I pointed out that the package contained a Nero Sports fitness bicycle, the delivery driver suggested that my logs might have been packed inside the box. I was flabbergasted by this suggestion, by which time the delivery man was halfway down the path. When I came to my senses I suggested to him that he should take the package back, or at least check that someone else in the Bristol area was due to receive a fitness bike. After checking his notes I was told he could not take the item back since he only did deliveries,” Harding says.

After finding his way through the maze of the Amazon website he says he eventually found a number to call where a very helpful person agreed to replace his missing logs. But when these arrived the second driver also refused to take the bike away.

“I was also told that if no one came to collect the fitness bike within 48 hours, I should feel free to dispose of it as I thought fit. That would be OK if had any use for an exercise bike, but I don’t. Aside from the inconvenience of having it filling my front room, I’m astonished at the cavalier waste of the world’s resources that have gone into this whole process. I’m guessing that someone else has ordered this machine and they have been similarly sent a replacement, when they should have this one,” he says. 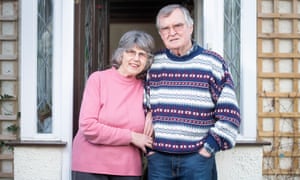 After Guardian Money stepped in, the response was swift – and the firm collected the package from Harding almost immediately, with a bouquet of flowers and a box of chocolates.

A spokesman for Amazon said: “We have contacted the customer to apologise for his experience and collect the bike. We have also investigated the matter with our delivery partner and are taking appropriate action.”

Environmental groups are increasingly questioning the role of tech firms and their lack of response to the climate emergency.

Last August, Amazon was criticised by activists and customers after introducing a range of plastic packaging that cannot be recycled in the UK. The online retailer had started sending small items in unrecyclable plastic envelopes, seemingly to allow more parcels to be loaded on to each delivery truck.

In 2018, Money highlighted the extraordinary case of south London resident Tiffany Crow, who was being bombarded with hundreds of parcels from Amazon. Boxes of wireless speakers, fitness wristbands and batches of projectors kept arriving at her home, forcing her to spend hours dealing with them, and recycling all the packaging. Her repeated calls to Amazon to get them stopped drew a blank, and like Harding she was told she could do what she liked with them.

In January, hundreds of Amazon employees in the US defied corporate policy to publicly criticise the company for failing to meet its “moral responsibility” in the face of the climate crisis.