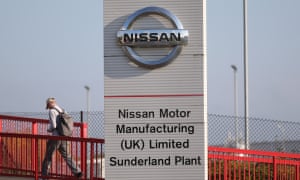 British car manufacturing slumped to its lowest level since 2010 last year, as carmakers faced up to the decline of exports to major markets and Brexit uncertainty, which prompted factory shutdowns and weak consumer confidence.

UK factories produced 1.3m cars during 2019, a decline of more than 14% on 2018, according to data published on Thursday by the Society of Motor Manufacturers and Traders (SMMT).

It represented the third consecutive annual decline in production since 2016, the year of the EU referendum, amid a freeze in investment and shutdowns from major manufacturers preparing for multiple Brexit deadlines that never actually arrived.

Mike Hawes, the SMMT’s chief executive, said: “The fall of UK car manufacturing to its lowest level in almost a decade is of grave concern.”

British exports to all major markets fell. Exports to the US and the EU fell by 9.8% and 11.1% respectively compared to 2018, but output destined for Asian markets, previously key sources of growth, fell more steeply. Production for Japan fell by 17.7%, while for China it was down 26.4%.

That production slump came before the coronavirus outbreak that is expected to stop car sales in many regions for weeks, adding another unexpected problem for carmakers already struggling with the decline of diesel sales and the heavy investments required to produce electric vehicles. The virus could also have knock-on effects on supply chains; Wuhan, the centre of the outbreak, is a major centre of the Chinese automotive industry.

Of the mass-market manufacturers in the UK, the worst performer was Honda. Production of the Civic at its Swindon plant, earmarked for closure next year, fell by 32%.

Production at Nissan’s Sunderland plant, which lost out on building the new X-Trail SUV and Infiniti luxury brand, fell by 22%. Output also fell by a fifth from Vauxhall’s Astra plant at Ellesmere Port, which is at high risk of closure if the UK does not achieve a good Brexit deal.

Despite the overall fall in production, the share of British-made cars bound for the EU rose to 54.8% of all UK output. Hawes said this showed that reaching a trade deal with the EU is by far the overriding priority for the industry. A trade deal with the US is “nowhere near as important”, he said.

Investment in the automotive sector recovered to £1.1bn during 2019, after enduring a dire 2018. However, that was still below the seven-year average, and a single investment by Jaguar Land Rover, Britain’s largest carmaker, accounted for almost its entirety. JLR production also fell by 14%.

“The most disturbing thing we’ve seen in the last few years has been this reduction in investment,” Hawes said.

“The reputation of the UK needs to be re-established as a good place to invest,” he added. “It’s been damaged. I don’t know if it’s permanent.”

Production of alternatively fuelled vehicles rose by 34.7% during the year, in a rare bright spot for the industry. That included pure battery electric vehicles such as the Sunderland-built Nissan Leaf, but the majority of those were hybrid cars, combining internal combustion engines with battery electric power.