Each month we look at key indicators to see what effect the Brexit process has had on growth, prosperity and trade 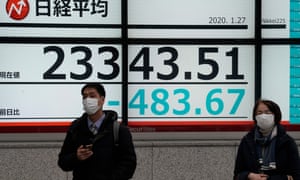 The pound has erased the gains made after Boris Johnson’s Conservatives won the biggest majority in more than 30 years at the general election, amid concern that Britain could end the Brexit transition period in December without an EU deal. Sterling had soared by about five cents against the US dollar on the foreign exchanges to above $1.35 after Johnson’s landslide victory. However, it has slumped back down to $1.30 over the past month after Johnson warned he will not extend the time for trade talks and could diverge from EU rules – causing disruption for businesses.

The pound remains more than 10% down on its level before the Brexit vote almost four years ago.

Financial markets around the world have been rattled by the coronavirus outbreak in China on the back of fears that quarantine measures could drag down growth in the world’s second largest economy, with a knock-on impact elsewhere around the world. Stock markets had begun 2020 close to record highs against a background of cooling tensions between the US and China in the long-running trade war between the two countries. The FTSE 100 soared to a high of 7,684 after Donald Trump signed phase one of a trade deal with Beijing in mid January. However, stocks have slumped over the past week, with the FTSE 100 dropping to below 7,500.

Inflation unexpectedly dropped to its lowest level for more than three years in December, fuelled by struggling retailers offering a wider range of discounts to tempt consumers during the pivotal Christmas shopping period. According to the Office for National Statistics, the annual rate on the consumer price index (CPI) dipped to 1.3% in December, from 1.5% in November, the weakest since November 2016. High street discounting and the price of a hotel room dragged down inflation, with steep reductions in the price of women’s clothing. City economists had been expecting the inflation rate to remain steady at 1.5%.

Britain’s trade balance, measuring the gap between imports and exports, jumped to a record surplus of £4bn in November, from a deficit of £1.3bn in October, as companies reduced their imports of goods in the month after the Halloween Brexit deadline. City economists had been expecting a deficit of about £2.6bn. According to the ONS, imports slumped by 7.8% on the month, while exports rose, suggesting that UK firms rushed to stockpile goods before the 31 October deadline and then made fewer orders in November.

Britain’s dominant service sector, which accounts for about 80% of the economy, recovered in December amid a rise in new work, according to closely watched surveys of business activity. The reading on the IHS Markit and the Chartered Institute of Procurement and Supply services purchasing managers index (PMI) rose to 50.0, up from 49.3 during November, to signal stabilisation in the sector that includes hotels, restaurants and the City. The reading was better than expected on a scale where 50.0 separates growth from decline. However, taken together with PMI readings for the construction industry and manufacturing sector, economists said the economy probably failed to grow in the fourth quarter because of Brexit and political uncertainty.

Britain’s jobs market staged a stronger than expected recovery in the three months to November, according to the ONS, easing pressure on the Bank of England policymakers to cut interest rates. Despite intense Brexit uncertainty towards the end of last year, the number of people in employment jumped by 208,000 to a joint record high of 32.9m, nearly double the 110,000 increase forecast by economists. Unemployment remained at a 45-year low of 3.8%. Growth in average weekly earnings, excluding bonuses, stagnated at 3.2%, unchanged from the previous period. Pay including one-off awards dropped to 3.4% from 3.5%.

High street sales in Britain slumped in December as consumers reined in their spending over the pivotal Christmas shopping period. Retail sales failed to rise for a record fifth month in a row – the longest period since 1996 – as household spending plunged by 0.6% on the month, below all estimates made by City economists. In a reflection of the difficult trading conditions facing retailers – after a series of disappointing trading updates for the festive period from firms including John Lewis and Marks & Spencer – consumer spending over the final three months of the year fell by 1% from the previous quarter. Sales growth for the year as a whole slowed to 0.9%.

The government borrowed less than expected in December despite a signal that the economy’s weakness at the end of last year hit corporate tax receipts. The ONS said the budget deficit – which measures the shortfall between public spending and tax income – stood at £4.8bn in December, down slightly from the same month a year ago. City economists had forecast borrowing of £5.3bn. However, borrowing for the first nine months of the 2019 financial year stood at £54.6bn, about 8% higher than it was for the same period in 2018. Corporate tax receipts for the year to date were down by 3.4%, the sharpest annual drop since 2012-13, in a signal that weaker economic growth has dragged down tax receipts.

Britain’s housing market showed signs of recovering in December, as agreed home sales rose for the first time since May and expectations of future sales jumped after the election. The gauge from the Royal Institution of Chartered Surveyors – which shows the difference between its members reporting price rises and falls – picked up to -2 in December from -11 a month earlier, beating the forecasts of City economists. Growth in UK house prices has eased since the Brexit vote, with prices falling on an annual basis in London and some surrounding areas. Prices have continued to rise in the Midlands and the north of England. Separate figures showed the number of mortgages approved by high street banks jumped to the highest level for almost five years in December.

The unequivocal election result in December prompted the highest surge in confidence for 11 years, as hopes rise in the City that Boris Johnson’s unexpectedly decisive victory could lift some of the intense political uncertainty holding back the British economy. According to the accountancy firm Deloitte’s survey of company finance bosses, one of the first early warning indicators since the election, which is closely watched by the Bank and the Treasury, found that 53% of respondents were more optimistic than three months earlier about the outlook. This was up from only 9% in the last survey conducted in October. Uncertainty over Brexit and the election had led many companies to pause their investment plan. While there are hopes of a bounce in economic activity at the start of the year, analysts warn the improvement could be short-lived if the country appears to be heading for a disruptive no-deal scenario at the end of 2020.