Global markets slide on back of coronavirus concerns in China 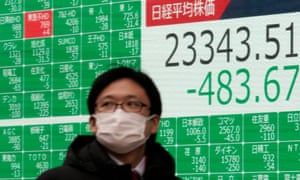 Financial markets around the world have been rocked as an exodus of foreign workers from China intensified fears over the impact of the coronavirus on the world’s second largest economy.

Major global companies have begun pulling staff from the province of Hubei at the hear of the outbreak or imposed travel restrictions on staff across Asia, telling any workers who visited the region to stay at home.

Global shares slid despite the Chinese authorities stepping up their response, with more than 2,700 cases and 81 deaths confirmed.

The FTSE 100 closed down by more than 2%, or 174 points, at 7,412 and other European markets sustained heavy losses as concerns increased over China’s economy as it attempts to bounce back from its long-running trade conflict with the US.

The French automotive group Peugeot said it was working to evacuate 38 international employees and their families from Hubei, where it has three production sites. Other companies, including the banking firm Standard Chartered, imposed travel bans to the city of Wuhan. Goldman Sachs, the US investment bank, also restricted travel, while HSBC said it was closely monitoring the situation for the safety of its employees.

In a signal of the impact on international business, Credit Suisse, the Swiss bank, sent staff in Hong Kong a memo telling them to work from home and not to travel to its headquarters in the city if they had visited the mainland in the last 14 days. According to the Financial Times, the bank is also offering temperature checks at its main office.

Standard Chartered, which is based in London but makes most of its profits and has most of its staff in Asia, is reducing face-to-face working in China and Hong Kong alongside its travel restrictions. It is also offering training on disinfecting and deep-cleansing buildings, teaching staff to recognise symptoms, and providing masks and hand sanitisers.

Luxury goods makers with significant sales in China and Asia plunged on financial markets across Europe, including Burberry and LVMH. Such firms would usually stand to benefit from a rise in sales from the lunar new year celebrations last Saturday.

Airlines and hotel groups, which could face losses because of travel bans, came under heavy selling pressure, while mining firms that have benefited from China’s manufacturing boom in recent years also fell in value.

Anglo American and Glencore also suffered, while the price of a barrel of oil fell by around 3% to below $60 amid concerns that the outbreak could exacerbate an economic slowdown in China and the rest of the world.

Joshua Mahony, a senior market analyst at the financial trading group IG, said: “The further this virus spreads, the worse it will be for Chinese economic output. We are also seeing commodity stocks slump, with the prospect of a decline in Chinese growth hurting expectations of demand in the sector.”

Safe-haven assets such as gold and government bonds jumped. Chinese financial markets were closed for the lunar new year, while Bloomberg reported that stock markets in the country could remain closed until at least next Monday as Beijing grapples with the worsening crisis.

Comparisons with the 2003 Sars outbreak have highlighted the potential for a prolonged process that could damage economic growth.

After the Sars outbreak, China’s annual GDP growth fell to 9.1% in the second quarter of 2003 from 11.1% in the previous three-month period, as the government imposed travel restrictions. However, GDP growth recovered to 10% in the second half of 2003.

This time around, the Chinese economy is much larger and more connected to the global economy. However, analysts said the government response to the coronavirus outbreak appeared to be tougher and more transparent, which could help limit the impact.

Mark Williams, chief Asia economist at the consultancy Capital Economics, said Chinese GDP growth would be significantly damaged by the outbreak. Rail passenger numbers on Saturday, the first day of the lunar new year, were 42% lower than on the equivalent day in 2019 and road passengers 25% lower. The declines in May 2003, the peak month of the Sars outbreak, were 57% and 45% respectively.

“Even if the coronavirus outbreak is brought under control quicker than Sars was in 2003, the economic impact now looks likely to be of at least a similar scale,” he said.