Greenpeace hits out at Davos banks for $1.4tn climate hypocrisy

Report highlights financial support given to hydrocarbon sector by 24 institutions 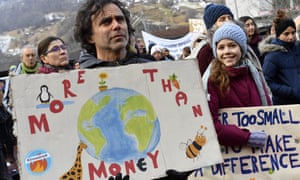 The world’s leading financial institutions have been accused of hypocrisy over the climate emergency, after providing significant support for the fossil fuel industry over the last five years.

A report by Greenpeace, the environmental group, highlights that 24 banks which regularly attend the World Economic Forum in Davos have provided $1.4tn (£1.1tn) of financial support for the hydrocarbon sector since the Paris agreement set new emissions reduction goals in 2015.

The financial cooperation with fossil fuel firms includes loans, debt underwriting, equity issuances and direct investment. The report, called It’s the Finance Sector, Stupid, also shows how some major insurers and pension funds that flock to Davos each year are key supporters of polluting industries such as coal.

The data was compiled from BankTrack, an organisation that monitors the financial sector. It shows that JP Morgan, the Wall Street investment bank, has provided $195bn of financial support to fossil fuel companies since 2015. JP Morgan declined to comment on the report.

Jennifer Morgan, Greenpeace International’s executive director, said the WEF’s mission statement is to “improve the state of the world” but the banks cited in the campaign group’s report are falling short of this goal.

“The banks, insurers and pension funds here at Davos are culpable for the climate emergency. Despite environmental and economic warnings, they’re fuelling another global financial crisis by propping up the fossil fuel industry,” said Morgan. “These money men at Davos are nothing short of hypocrites as they say they want to save the planet but are actually killing it for short-term profit.”

A Barclays spokesperson said: “We recognise that climate change is one of the greatest challenges facing the world today, and are determined to do all we can to support the transition to a low-carbon economy, while also ensuring that global energy needs continue to be met. In 2018 we facilitated £27.3bn in social and environmental financing across our business including green bonds and renewable financing.”

Some financial companies have made encouraging noises about addressing the climate emergency, after seeing rising public concern and an escalation in extreme weather events. They cite initiatives such as green bonds, and a UN-backed “principles of responsible banking” initiative.

Last week, asset manager BlackRock announced it would put sustainability at the heart of its active investment model. The announcement represented a major shift for the world’s biggest fund manager, although BlackRock’s huge “passive” investment arm will continue to invest in fossil fuel firms through tracked funds, for example.

Vincent Manier of ENGIE Impact, which advises companies on sustainability goals, said he believed investors will be forced to take the issue more seriously.

“What we can take away from BlackRock’s move is that investors that don’t integrate climate risk assessments into their overall portfolio management processes are not capturing the full risk profile of their investments. The onus is on companies to demonstrate that they have a holistic understanding of all risks facing their business, disclose them and are developing plans to mitigate those risks,” Manier said.

The climate emergency is a major issue at Davos this year. Klaus Schwabb, WEF’s founder, has written to attendees asking them to make their companies carbon neutral by 2050 at the latest.

Climate activists are demanding faster progress. Greta Thunberg, who speaks at Davos on Tuesday, is pushing global leaders to end the “madness” of huge ongoing investments in fossil fuel exploration and enormous subsidies for coal, oil and gas use.