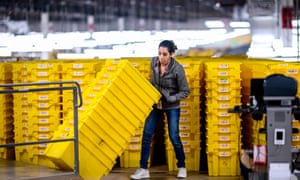 Rina Cummings has worked three 12-hour shifts every week at Amazon’s gargantuan New York City warehouse, called JFK8, on Staten Island since it first began operations in late 2018. As a sorter on the outbound ship dock, her job is to inspect and scan a mandated rate of 1,800 Amazon packages an hour – 30 per minute – that are sent through a chute and transported on a conveyor belt before leaving the facility for delivery. 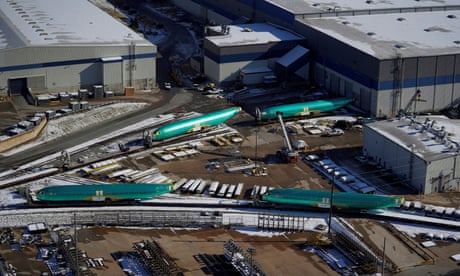 ‘The only ones not paying for Boeing’s mistakes is Boeing': laid-off supply workers voice their anger

Workers such as Cummings helped Amazon achieve its best ever Christmas this year. Faster shipping drove Amazon’s revenues to $87bn for fourth quarter of 2019, adding another $12.8bn to founder Jeff Bezos’s $128.9bn fortune. Amazon has just signed a deal to take another 450,000 sq ft of warehouse space on the island to speed delivery to its New York-area consumers.

But while New York customers, and Amazon’s shareholders, may be happy, some workers are not. In November, as the holiday rush got into full swing, Cummings was one of 600 workers at the Amazon warehouse who signed and delivered a petition to management calling on Amazon to improve working conditions.

The petition called on Amazon to consolidate workers’ two 15-minute breaks into a 30-minute one. Workers say it can take up to 15 minutes just to walk to and from the warehouse break room. Workers also called for Amazon to provide more reliable public transit services to the warehouse. They also called attention to reports of high injury rates at the facility there, which were found to be three times the national average for warehouses, based on the company’s injury reports to the Occupational Safety and Health Administration (OSHA).

Cummings first became involved with Amazon worker organizing efforts after witnessing several cases where, she claims, her colleagues were treated unfairly – and the safety concerns she works through during her own shifts at Amazon. 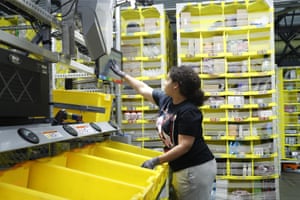 “There are days I say I’m just at the mercy of God,” said Cummings. She said the only changes Amazon implemented after the high injury report was published was to install video monitors around the warehouse that tell workers safety is the company’s number one priority.

“There has been no real change. There are still injuries. They were saying the report is not accurate, but it’s just a way for them to avoid responsibility,” she said.

Cummings said injuries are common among her colleagues, and she often experiences close calls. A few weeks ago, a pin sticking out of the conveyor belt tore off one of her work gloves, almost taking her hand with it. She also said some packages that drop on to her conveyor belt from the chute are either too large to be on it or improperly packaged, so the package’s contents burst open on the belt, which she said recently injured one of her colleagues.

When packages, especially envelopes with liquid, burst on the conveyor belt, Cummings often has to stop the belt to clean up the mess, but is still expected to hit her hourly rate. She’s been written up once for missing her rate because several of these incidents happened in the same week.

“People get fired regularly,” she said. “It just takes two or three write-ups, depending on the severity. You can get fired for anything.”

Cummings has impaired vision and is required by law to receive disability accommodations for her job. But she said new managers consistently try to place her in other departments she is unable to do the work in.

“I had a manager ask me: are you sure you can’t see?” said Cummings. Her mobility counselor sent Amazon a detailed email with suggestions on safety improvements, such as painting safety lines in the warehouse brighter colors and installing yellow safety strips on all stairs. But Cummings said all the suggestions were ignored.

An Amazon spokesperson said the company has a comprehensive medical accommodations process.

Raymond Velez worked as a packer at the Amazon JFK8 warehouse from October 2018 to November 2019. He was required to pack at a rate of 700 items per hour. He said workers are regularly fired for missing rates.

Juan Espinoza, who worked as a picker at the Amazon Staten Island warehouse, quit because of the grueling working conditions. 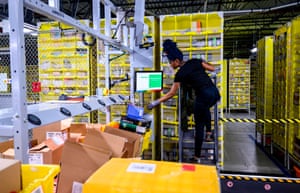 “I was a picker and we were expected to always pick 400 units within the hour in seven seconds of each item we picked,” said Espinoza. “I couldn’t handle it. I’m a human being, not a robot.”

Ilya Geller, who worked as a stower, told of the pressure workers face from being surveilled by computers to ensure productivity rates are met.

“You’re being tracked by a computer the entire time you’re there. You don’t get reported or written up by managers. You get written up by an algorithm,” said Geller. “You’re keenly aware there is an algorithm keeping track of you, making sure you keep going as fast as you can, because if there is too much time lapsed between items, the computer will know this, will write you up, and you will get fired.”

An Amazon spokesperson told the Guardian in an email: “Like most companies, we have performance expectations for every Amazonian and we measure actual performance against those expectations.”

The spokesperson said coaching is provided to under-performing workers.

Jimpat Lacewell started working at Amazon in Staten Island in November as a sorter, but quit after three days because it reminded him of prison – not least because of the 20-minute wait to get through security in and out of the facility.

“I would rather go back to a state correctional facility and work for 18 cents an hour than do that job,” Lacewell said. “I’m sure Mr Bezos couldn’t do a full shift at that place as an undercover boss.”