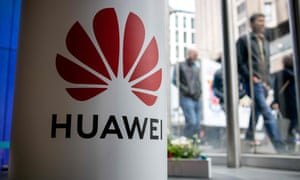 Boris Johnson is facing a possible rebellion over his decision to allow China’s Huawei to build part of Britain’s 5G infrastructure.

Senior Tories are examining whether they could try to force a Commons vote on tightening restrictions on Huawei or reduce the cap on its market share further from 35% in the coming years.

The culture secretary, Nicky Morgan, toured the airwaves on Wednesday defending the government’s decision, saying the cabinet was “clear-eyed” about the risks of Huawei as a “high-risk vendor” with links to the Chinese state.

Iain Duncan Smith, the former Tory leader, told the BBC’s Newsnight: “We want to see modifications and changes made. We want to see commitment to actually getting Huawei out of the system over a period of time. They’ve got more to do.”

Any rebellion would require more than 40 Tories to defy Johnson over the decision when legislation relating to Ofcom’s oversight of Huawei comes to the House of Commons.

The government announced its unanimous decision on Tuesday after a meeting of the national security council.

The company’s share of the new market will be capped at 35% for each of Britain’s four mobile phone operators, and it will be banned from core parts of the telecoms network and from sensitive sites, including nuclear and military facilities.

Huawei was also formally deemed a “high-risk vendor” because its Chinese ownership meant Beijing could in theory force it to carry out surveillance of British citizens in the future.

However, the Times reported that the defence secretary, Ben Wallace, had spoken out against the decision in the meeting, saying that China was a “friend of no one”.

In spite of reservations in the UK, Johnson did appear to have averted a full-blown public confrontation with the US government over Huawei.

The Trump administration had given a series of strongly worded warnings about the security risks in the run-up to the decision, but was prepared to soften its stance after a phone call between the British prime minister and the US president on Tuesday afternoon.

Sources said that while the US remained disappointed with the decision to allow “an untrusted vendor” into the UK market, the security and economic relationship between the two countries was too important to jeopardise in a row over mobile phone technology.

UK and US sources said the two countries would try to work together to further reduce the use of Huawei in Britain, with Downing Street hoping it has been able to persuade the notoriously unpredictable US president not to escalate the issue.

But leading Republicans have criticised the government’s decision. Newt Gingrich, the former speaker of the House of Representatives, said it amounted to a “major defeat” for the US. Tom Cotton, a Republican senator, described the decision as like allowing the KGB to build the UK’s telephone network during the cold war.