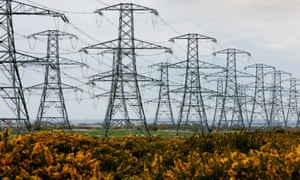 Electricity bills sent to UK homes are higher than they should be because the energy regulator has allowed electricity network companies to rake in bigger than expected profits, according to Whitehall’s spending watchdog.

Households have paid at least £1bn more than necessary over recent years, according to the National Audit Office, because the regulator, Ofgem, was not tough enough on the electricity network companies.

A report from the NAO, published today, found that the companies that run Britain’s regional electricity grids received extra profits because the regulator overestimated the cost of upgrading their networks by using out of date financial information.

The regulator is tasked with keeping a tight rein on how much each firm can spend to limit how much they can claim back through energy bills. The typical cost of running the UK’s electricity cables and networks makes up around a fifth of the average electricity bill, or £130 a year.

Gareth Davies, the head of the NAO, said Ofgem had saddled billpayers with “higher than necessary costs” because its targets for the industry were not tough enough.

The report said Ofgem set cost budgets which were too high, and performance targets which were too low. The regulator also overestimated how much money the network companies’ shareholders would need to make to incentivise their multibillion pound investments in grid upgrades.

If the regulator had used up-to-date information on energy network returns it might have saved consumers £800m over the last eight years, the NAO said. Ofgem might have saved between £200m to £800m if it calculated the investment costs based on market index indicators.

Gillian Guy, the chief executive of Citizens Advice, said the NAO report provides more evidence that energy networks have enjoyed a major windfall at the expense of consumers. The energy consumer watchdog estimated in its own report in 2017 that energy bill payers may have been overcharged around £7.5bn by electricity and gas networks.

“This cannot happen again,” Guy said. “The regulator must hold its nerve, resist the efforts of networks to water down its proposals and deliver a price control that works for consumers.”

The report is likely to reignite criticism of the UK’s electricity network companies – including UK Power Networks, SSE Electricity Networks and Scottish Power Energy Networks – after the Labour party vowed to nationalise the companies in its general election manifesto.

Alan Whitehead, the shadow energy minister, said: “The NAO have demonstrated that whilst energy networks have provided a good reliability of service, this has been achieved at far greater cost to customers than might otherwise have been the case had price and development controls been properly managed.”

The NAO said energy network companies will “have a crucial role to play” in cutting greenhouse gas emissions from the energy system by rolling out electric vehicle charge points and connecting renewable electricity.

The networks have already connected around 1m solar panels, but by 2050 the amount of electricity flowing through the electricity grid will need to double to meet the rising demand for electric transport and heating.

In response to the NAO report Akshay Kaul, Ofgem’s networks director, acknowledged that energy costs have “turned out to be higher than they needed to be”, and vowed to save customers money in the next round of price control.

A spokesman for the Energy Networks Association said: “Network costs are down by almost a fifth [since the 1990s], power cuts are shorter and less frequent than they ever have been, and the UK has become a superpower of renewable energy.”

Ofgem admitted last year that it had allowed energy network companies to make bigger than expected profits at the expense of household bills. It said that with hindsight it had set the rate of return too high, and that some companies had managed to spend less than planned, to receive higher profits.