Peter Diamandis: ‘In the next 10 years, we’ll reinvent every industry’ Zoë Corbyn 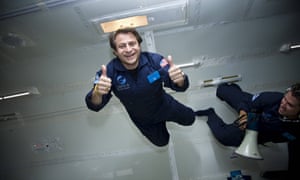 Peter Diamandis is best known as the founder of the XPrize Foundation, which offers big cash prizes as an incentive for tech solutions to big problems. The entrepreneur and investor is also co-founder of the Singularity University, a Silicon Valley-based nonprofit offering education in futurology. His new book, The Future Is Faster Than You Think, argues that the already rapid pace of technological innovation is about to get a whole lot quicker.

Do you think people are worried about where technology is going to take us? I can palpably feel how fast things are changing and that the rate of change is accelerating, and I have picked up a growing amount of fear coming from people who don’t understand where the world is going. And that is not good when you’re trying to solve problems. This book is about giving people a roadmap for where things are going over the next decade so they have less fear and more anticipation. Because, yes, in the next 10 years, we’re going to reinvent every industry on this planet, but the change is one that is for the benefit of masses, whether it’s in longevity or food or banking.

You say in the next decade we’ll experience more progress than in the past 100 years. Why? Computation is the foundation. Be it classical or quantum computing, as it becomes faster and cheaper lots of technologies that use it also become more capable. For example, communication networks, sensors, robotics, augmented and virtual reality, blockchain, and AI are all exponentially improving. But they are also being interweaved and converging: for example AI with robotics. And that’s getting even faster because the number of people with access to technology is increasing, so we are able to solve more problems. There’s also more capital available than ever before which means more crazy ideas being funded, which in turn leads to more breakthroughs. And the cost of doing things is also getting cheaper: the number of experiments going on in the “Silicon Valley garage” is exploding.

You sketch out the impacts of these converging technologies on various aspects of our lives over the next decade, from what we will eat to how we will entertain ourselves to transport. So how will we be getting around in 2030? Car ownership will be a thing of the past. You’ll turn your garage into a spare bedroom and your driveway into a rose garden. After breakfast in the morning you will walk towards the front door of your house. Your AI will know your schedule, it will see you moving and it will have an autonomous electric car waiting for you. It will know you didn’t get much sleep last night, so it will have pulled a car with a bed in the back so you can sleep on your way to work. Your commute time will be yours.

What about shopping? Repeat purchases will also be done by your AI, which you will give permission to measure and see everything. To shop for clothes, you will enter a VR shopping mall where you can conjure up a VR fashion show of 100 of your avatars wearing different outfits, to decide what you like. There will be a digital twin for every piece of clothing you own already, so you can see how it would meld with your wardrobe. And if you decide you want something, it will be produced specifically to your size, because you will have a body file of exactly your proportions.

This all-knowing AI sounds scary. Think of it from this perspective. I have the most amazing executive assistant in the world. She’s able to know what I need before I need it. It is a blessing that is now going to become available to others.

What technologies do you see changing healthcare? You’ll have annual full body MRI scans; it will become malpractice not to use AI in diagnosis. It will be health care rather than sick care. It will save money and lives.

Many of the technologies you mention in the book are very nascent. No longevity drugs, cell-based meat or brain computer interfaces are on the market yet. Aren’t you over hyping how far things will come in a decade? Why should we believe you when you have your own investments in a lot of this technology? You don’t have to believe me. I am presenting what I see based on my experience and I am putting myself out there to create this future. We have become jaded by the amazing things that we have and how far we’ve come. Go back a decade and talk about the capability of smartphones now.

With brain computer interfaces, my partner at Singularity University, Ray Kurzweil, predicts that our brains will connect seamlessly to the cloud by the mid-2030s. He averages an over 80% success rate for his predictions. And Elon Musk’s company Neuralink is making ground-breaking progress – its technology is being studied in primates and the plan is to start trials in humans this year.

Your book is very optimistic. But technology creates problems as well as solving them. For example, we have huge data privacy and surveillance issues, and AI has been exposed as having built-in biases. Every powerful technology that we’ve ever created is used for good and for bad. But look at the data over the long term – how the cost of food production per person has plummeted, how longevity has increased. I’m not saying there aren’t going to be challenges, but on the whole technology is making the world a better place and will continue to. For me it’s about uplifting those billions of people who have been in fundamental survival mode.

You identify looming threats including climate change, the water crisis and mass extinction. And then you look at technologies that might fix these things. But wouldn’t we be better concentrating our efforts on changing our ways? Changing human behaviour – for example, telling people they have to stop eating fish because of overfishing – is hard. If we can use cell-grown meat technology to replace overfishing by getting tuna that is healthier and cheaper, we should.

Do you share the existential worry of Elon Musk that the AI we create will turn around and destroy us all; do you worry that robots and AI will take our jobs? I don’t, and a lot of the leaders who I spend time with don’t either. Five years ago I was much more worried about our jobs, but the data is showing that we’re recreating more than we’re losing. The real opportunity isn’t going to be AI versus humans; it’s going to be AI with humans.

The biggest concern I have is how we humans, and especially governments are going to cope with the speed of change that’s coming. When things are moving too fast we tend to say “slow down” or “Stop!” But there is no switch on the rate of innovation. Cities and countries that outlaw Uber may not find themselves the places where technology deploys first, which will economically disadvantage them.

What technological innovations are you most looking forward to seeing arrive in your own life? I am a space enthusiast. I truly want to walk on the moon and Mars. I’m passionate about new technologies to extend life. The idea of being able to connect [via brain computer interfaces] with other people’s minds I think is a beautiful one that would take us to a new level of empathy. All these technologies will materialise. It is not a matter of if, only when. And you don’t have to choose one or the other.

• The Future Is Faster Than You Think by Peter Diamandis and Steven Kotler is published by Simon & Schuster (£20). To order a copy go to guardianbookshop.com. Free UK p&p on all orders over £15