Quick, cheap to make and loved by police – facial recognition apps are on the rise John Naughton 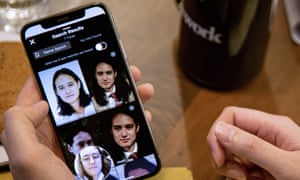 Way back in May 2011, Eric Schmidt, who was then the executive chairman of Google, said that the rapid development of facial recognition technology had been one of the things that had surprised him most in a long career as a computer scientist. But its “surprising accuracy” was “very concerning”. Questioned about this, he said that a database using facial recognition technology was unlikely to be a service that the company would create, but went on to say that “some company … is going to cross that line”.

As it happens, Dr Schmidt was being economical with the actualité, as the MP Alan Clark used to say. He must surely have known that a few months earlier Facebook had announced that it was using facial recognition in the US to suggest names while tagging photos. And some time after Schmidt spoke, Google itself launched a facial recognition feature in its own ill-fated social network, Google+. It was called Find My Face and it scanned photos from users and their friends to identify recognisable faces. Four years later, as the tech analyst Ben Thompson points out, Microsoft Azure and Google Cloud released face-recognition APIs, followed by Amazon Web Services with its Rekognition service in 2016. So it turns out that lots of companies – including Schmidt’s own – had crossed the facial recognition red line.

All of which makes one wonder why there was such a fuss the other week when the New York Times published a big exposé of Clearview AI, a tiny company based in New York. “The secretive company that might end privacy as we know it”, read the breathless headline over the story about a start-up that helps law-enforcement authorities to match photos of unknown people to their online images. Was it because Peter Thiel – the creepy billionaire geek from central casting – had been an early investor? Or because Hoan Ton-That, the ingenious co-founder of Clearview, had once, like Thiel, been traduced by Gawker? Or because the other co-founder was a guy who used to work for Rudy Giuliani, Trump’s lawyer? Or was it simply because the article revealed to an astonished – and hopefully alarmed – lay public the extent of the capabilities of facial recognition technology? After all, what it suggests is that if you have ever had your photograph published online then the cops (and presumably any other Clearview client) can find and identify you.

For me, the most noteworthy thing about Clearview AI is that it’s such a small outfit. Essentially, Ton-That created it by hiring two hackers. One was charged with building software for “scraping” images from online sources. (This sounds painful, but really it’s just automated browsing and data-extraction: there are dozens of tools for doing this available online.) The software then scraped several billion images from across the web – from employment sites, news sites, educational sites and social networks including Facebook, YouTube, Twitter and Instagram. The other programmer was charged with creating a facial recognition algorithm, which they probably did by building on software published in academic papers. The result was a system that was simplicity itself to use – upload a photo and in many cases you get a name.

Clearview began by marketing the system to law-enforcement authorities. According to the NYT report, many of their 600 customers love it. In February 2019, the Indiana state police solved a case within 20 minutes of using the system. There was a fight in a park that ended with one man shooting another in the stomach. A bystander recorded the crime on a phone, so the police had a still of the gunman’s face to run through Clearview’s app. They immediately got a match: the man had appeared in a video on social media, and his name was included in a caption on the video. Bingo!

You can see why this stuff is catnip for cops. So why has it taken so long to surface? One reason might be that all social media sites have rules that prohibit scraping. So maybe entrepreneurs were put off by that. Clearview wasn’t, perhaps because it had a lawyer who knew about the recent case in which LinkedIn tried and failed to block and sue scrapers. The judge said that not only could it not sue, but also that it’s not even allowed to try to block scraping by any technical means.

Ultimately, the lesson of Clearview is that when a digital technology is developed, it rapidly becomes commodified. Once upon a time, this stuff was the province of big corporations. Now it can be exploited by small fry. And on a shoestring budget. One of the co-founders paid for server costs and basic expenses. Mr Ton-That lived on credit-card debt. And everyone worked from home. “Democracy dies in darkness” goes the motto of the Washington Post. “Privacy dies in a hacker’s bedroom” might now be more appropriate.

Space invaders There’s a lovely essay by Ian Bogost in the Atlantic, Every Place Is the Same Now, about the impact of the smartphone on our perceptions of space(s).

Chinese whispers An intriguing post by economist Christopher Balding on his blog, Balding’s World, makes the case against Chinese tech giant Huawei. If his analysis is accurate, then Huawei is a security risk. Not that that will worry the Brexiteers.

Character flaw Also in the Atlantic, “Why Twitter may be ruinous for the left”, an interesting assessment by Robinson Meyer. For “left” read “democracy”.