Never mind their cold, hard logic and tireless dedication to the task at hand – the most unappealing aspect of robots to come may well be their personal hygiene.

In a demonstration of how to build machines that do not overheat, researchers have created a robot hand that regulates its temperature naturally – by breaking into a sweat.

The soft, clammy appendage cools itself three times more efficiently than a human by secreting water on to its “skin” when it gets too warm. The water then removes heat as it evaporates into the air.

The work aims to boost the endurance of robots that are in danger of overheating through the repetitive nature of the jobs they perform, or because of the hot environments they operate in.

“As is often the case, biology provided an excellent guide for us as engineers,” said TJ Wallin, a researcher who has joined Facebook since working on the project at Cornell University in New York. “It turns out that the ability to perspire is one of the most remarkable features of humans.”

While robots can be fitted with cooling systems similar to those found in cars, where water is circulated in a closed loop, the researchers led by Robert Shepherd, an engineer at Cornell, sought a more natural solution to the overheating problem.

The team focuses on soft robots, which can be more flexible, lifelike and safer for humans to work with than traditional robots. But these benefits come at a cost, one being that the materials used are often less able to cope with big temperature changes.

When the fingers are pressurised by pumping in more water, they bend into a gripping movement. At low temperatures, the pores stay shut, but when the finger heats up, the pores expand and the hydrogel “sweats” to cool itself down. The surface of the finger is patterned to create a high surface area, increasing the evaporation rate.

Tests showed that, in the presence of a fan, the sweaty fingers cooled six times faster than fingers that had no sweating ability. The robot hand had a cooling capacity of 107 watts a kg, more than three times that of humans and horses, two of the most effective sweaters in the animal kingdom.

“The best part of this strategy is that the thermal regulatory performance is based on the material itself. We didn’t need to add sensors or other components to control the sweating rates,” said Wallin. Further experiments showed that the sweaty hand could cool hot objects by picking them up and drawing heat from them.

While sweating helps the hand to keep cool, the loss of water impairs the grip, because the water doubles as hydraulic fluid. Another shortcoming is that sweat can make the fingers more slippery. These problems could be solved, said Shepherd, by topping up the hand’s water supply and adding extra grip to the fingers.

Writing in Science Robotics, the researchers describe how the sweating system could pave the way for robots that slide rather than walk, release fluids to clean themselves, and even digest and absorb nutrients. 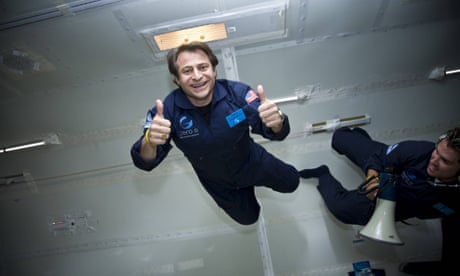 Peter Diamandis: ‘In the next 10 years, we’ll reinvent every industry’

Prof Jonathan Rossiter, head of the soft robotics group at Bristol Robotics Laboratory, said: “If future robots could be cooled naturally and automatically then they could perform much better in a much wider range of environments. Humans can survive in the heat of the Sahara and in the freezing conditions of the Antarctic. Future robotics should be able to do the same.

“There is potential in this work to extend it to wearable devices and even ‘second skins’,” he added. “Of course, in the case of a second skin, one may not want the robotic skin to generate too much sweat because of the social norms around sweating and personal hygiene.”