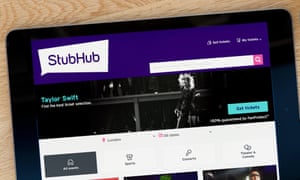 The ticket resale website StubHub is misleading consumers and could face legal action, the consumer regulator has warned, fuelling calls for intervention in the company’s proposed £3.1bn takeover by rival Viagogo.

The Competition and Markets Authority (CMA) said it was “unacceptable” that StubHub was defying a court order demanding that ticket companies abide by consumer law.

It highlighted a series of transgressions it believes could be illegal, including failure to warn ticket buyers that they might be refused entry at the turnstile for events where ticket resale is banned.

Well-known artists such as Ed Sheeran impose restrictions on resale through StubHub and Viagogo, due to concern that the platforms are overrun by touts hoovering up tickets at the expense of fans and selling them on for profit.

The CMA said StubHub was also misleading consumers about the number of tickets available. Resale sites have previously been criticised for falsely indicating that there are only a few seats left, putting pressure on consumers to make snap decisions.

StubHub is also failing to tell buyers where they will be sitting and omitting full contact details of its so-called “business sellers”, commonly known as ticket touts.

The CMA is understood to have given StubHub until mid-February to make improvements to its website or face action through the courts.

The regulator obtained a court order against resale websites last year, demanding that they comply with laws designed to protect consumers. It has already launched contempt of court proceedings against Viagogo for failing to do so.

While the CMA dropped the case after Viagogo made some changes to its website, the regulator is understood to be receiving ongoing complaints about both companies.

In December, it opened an investigation into Viagogo’s proposed £3.1bn takeover of StubHub to determine whether a combination of the only two major players in ticket resale would affect competition in the UK.

FanFair Alliance, a music industry group backed by the managers of acts such as PJ Harvey, Mumford & Sons and One Direction, said the CMA’s announcement “highlights continuing dysfunctions in the secondary ticketing market”.

“It should also provide yet more impetus for regulators to investigate the proposed merger between Viagogo and StubHub,” it added

The CMA’s chief executive, Andrea Coscelli, said StubHub’s alleged defiance of its court order supported the regulator’s call to be given powers to rule on whether companies have broken the law and impose fines.

“StubHub had previously committed to make important changes to the information on its site, so anyone buying a ticket would know what they were getting before parting with their money. It’s therefore unacceptable that we have now found these concerns,” said Coscelli.

“We have demanded swift action to resolve these problems and are pleased that StubHub has said it will make changes in response.

“We will closely monitor the firm’s efforts and, if it does not quickly implement changes that satisfy us, we will take further action – potentially through the courts.”