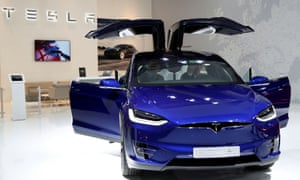 Tesla’s share price rose sharply in late trading on Wednesday as the company announced another profit and said it would sell more than half a million cars this year.

Elon Musk’s electric vehicle company made a profit of $105m in the last quarter of 2019 on revenues of $7.38bn, both were better than expected and sent Tesla’s share close to 7% higher in after-hours trading.

The good news continued a remarkable streak for Tesla after a period when many doubted its long-term viability. Tesla’s shares have surged nearly 120% since the company’s third-quarter earnings release in October.

In a statement the company announced it expects to “comfortably” sell more than 500,000 vehicles in 2020, and that thanks to increased production ramp of its Model 3 vehicles in its Shanghai plant and the Model Y in Fremont, California, “production will likely outpace deliveries this year”.

The surge in Tesla’s share price has made the company more valuable than General Motors and Ford combined. The company passed a value of $100bn earlier this month and closed before the latest news at $104.7bn.

If Musk can keep Tesla’s value above $100bn for the next six months, he will earn a $350m bonus, the first of 12 such bonuses that will amass the billionaire a $50bn payday if he succeeds in turning Tesla into a company valued at $650bn over the next decade.

Doubters remain. Close to 15% of Tesla’s shares are held by short sellers – investors betting that the company’s share price will collapse and Musk will fail to fulfill his ambitious targets. Those investors have lost more than $8bn in the last seven months.