THE OUTER WORLDS’ DYSTOPIAN FUTURE IS FAR OFF, BUT IT’S NOT IMPOSSIBLE

AfterAfter landing on Terra 2 for the first time, I made my way to a small, private company-owned town called Edgewater for some business. As I approached the colony, mostly known for the Saltuna Cannery, I stopped to talk to a man in a hard hat who was hanging around outside. “None of us own our gravesites,” the man, named Silas, told me. “We rent them from the company.”

Edgewater is owned by Spacer’s Choice, meaning that almost everyone who lives there is at the whims of the mega-corporation. They face incredibly harsh working conditions, often fleeing to live somewhere else, without protection, on the planet. They also have to pay to rent a spot for their future grave in the cemetery. Some families had become delinquent, and Silas needed me to collect the money that was due, discreetly and by whatever means necessary.

“Look, I don’t want to talk about it,” he said, asking me to strong-arm one person in particular. “Just make sure he pays up.”

That was one of my first encounters in The Outer Worlds, a first-person adventure game developed by Obsidian Entertainment. It’s set in a universe where President William McKinley was never assassinated in 1901, meaning President Theodore Roosevelt would never break up monopolies, including John D. Rockefeller’s grip on the oil industry and J.P. Morgan’s control of railroads. It’s a universe where mega-corporations took their capitalist ventures into outer space with little policing by the government on Earth. Fictional companies like Spacer’s Choice own the very planets on which people live and work.

“We started thinking about the mining towns at the turn of the century, these companies owned everything,” Outer Worlds game director and legendary game designer Leonard Boyarsky tells me over Skype. “It was basically indentured servitude in everything but name. It’s just snowballed from there.” 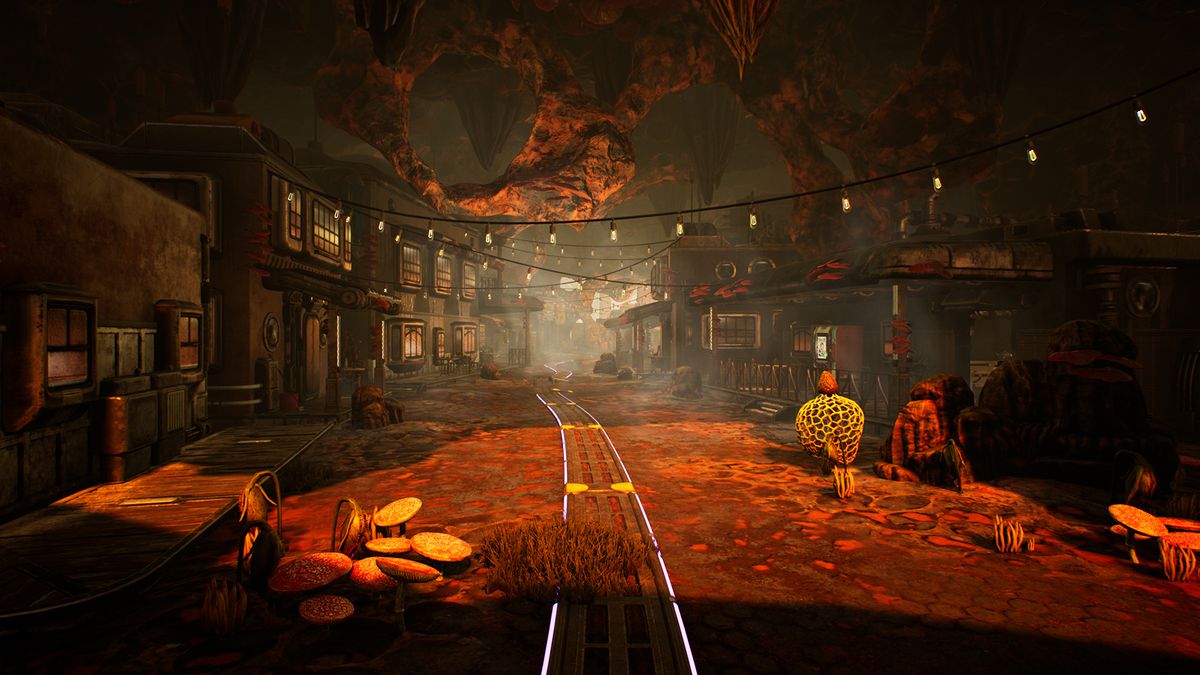 As I played through Obsidian’s first-person planet hopper, I encountered factory bosses who asked me to bust up unions and scientists who sent their workers into perilous dangers over toothpaste. Each twist and turn of the main plot satirized how mega-corporations treat the workers they need to survive. “Sadly, this stuff is a reality and it keeps forcing itself into our conscious,” Boyarsky says. Fellow game director and game development legend Tim Cain adds that “it’s going to be weird if our first Moon base or base on Mars is ‘brought to you by Pepsi.’”

Some of the biggest companies jumping into the space industry, including major names like SpaceX and Blue Origin, are owned by billionaires like SpaceX CEO Elon Musk and Blue Origin founder Jeff Bezos, two moguls whose fortunes were built in part by the terrible working conditions in Tesla’s factories and Amazon’s warehouses, respectively. Much of the tech industry runs on a mindset of workers being underpaid and overworked. Once we migrate into space, will we be much better off than the people of Edgewater?

“I DON’T THINK WHEN WE GET INTO SPACE WE’LL BECOME MORE ENLIGHTENED BEINGS.”

“The best science fiction is based on a reflection of our own society,” says space industry analyst and SpaceNews senior writer Jeff Foust. “I don’t think when we get into space we’ll become more enlightened beings and shed some of the flaws we have.”

The Outer Worlds isn’t the first piece of media with a bleak depiction of space colonization. The idea of space commercialization and the consequences that come with it are older than space exploration itself. Shows like Star Trek and The Expanse and movies like 2001: A Space Odyssey and Ad Astra have imagined how current political tensions, economic inequality, and cultural divides might evolve once we have the ability to colonize space.

Boyarsky and Cain intended The Outer Worlds to be an alternate take on history where space travel was discovered at a time when mega-corporations could take advantage of it for their own gain. Space travel in our reality was fueled by the Cold War Space Race that started in the mid-1950s. It was completely government-run, but that’s no longer the case.

Over the past 20 years, the real space industry has become more commercialized. Companies like Richard Branson-owned Virgin Galactic, SpaceX, Blue Origin, and others have popped up with independent ventures. “The government now, under Obama and Trump, does see the value of using the commercial sector,” says astrobiologist, former NASA employee, and editor of NASA Watch Keith Cowing. “They can do things cheaper than doing things in-house, which would take longer and be more expensive. Before this NASA did everything, and there wasn’t an option outside that.” 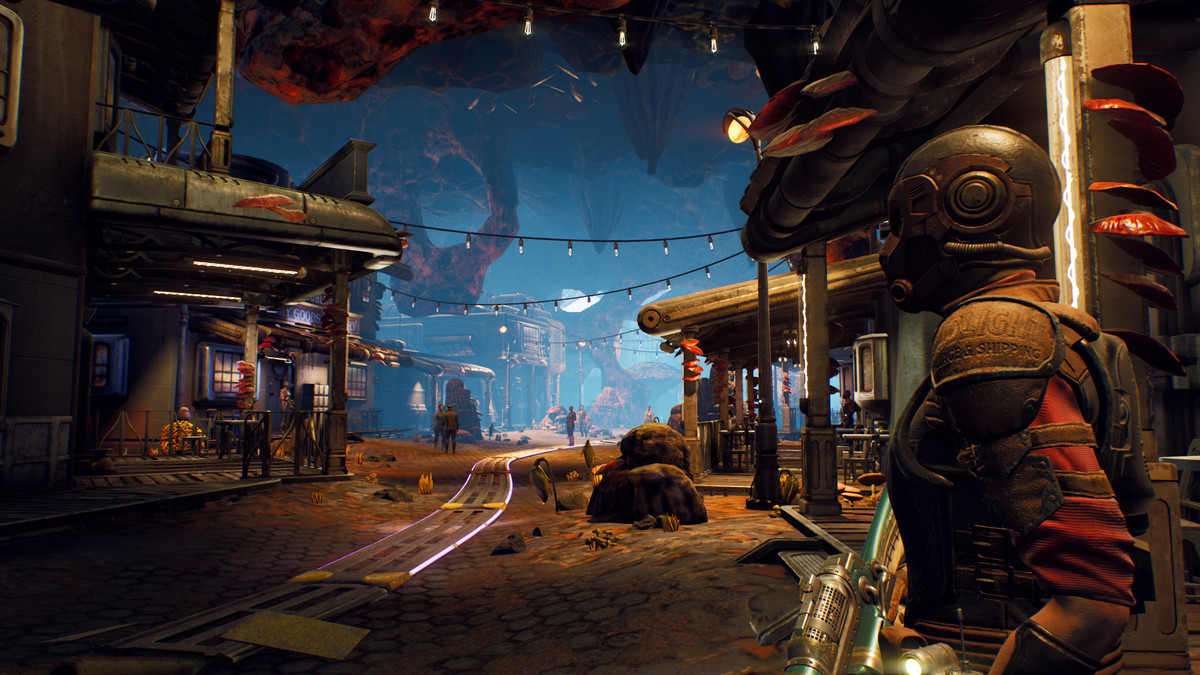 While technological advancements have made space exploration cheaper (some satellites are the size of a shoebox), it’s still an incredibly expensive endeavor, and most companies rely on government partnerships and funding. Space is still a priority to the current White House administration, but NASA is operating with a smaller percentage of the federal budget. NASA worked with 5 percent of the federal budget during the Apollo missions, which amounts to about $6 billion per year at its peak in the 1960s. NASA’s budget today is $22 billion, which is less than half a percent of the federal budget.

NASA is still building a record number of spacecraft, but trends of privatization are growing as Trump wants to transition the International Space Station to the private sector and many companies are preparing their own private spacecraft for low Earth orbit in the next several years.

“THERE IS NO ONE THAT CONTROLS OR OWNS THE MOON.”

While the Halcyon Corporate Board, a group made up of 10 private companies that serve as the main antagonist in The Outer Worlds, is bad in its own right, much of the major union-busting and unethical behavior comes when these companies operate outside the reach of the government on Earth. If a company were to shed its home on the blue planet to operate solely in space, there would be no laws in place by which they’d need to abide.

The private sector is getting closer to being capable of launching habitable spacecraft into orbit and eventually running crewed missions to the Moon and Mars. Right now, there aren’t enough checks and balances to keep them in line. Private companies launching satellites need to apply for licenses from the Federal Communications Commission and sometimes the National Oceanic and Atmospheric Administration, and they need to abide by regulations when launching rockets and other aircraft. But few laws cover the basics of what is enforceable in space.

“Those types of laws govern activities here on Earth, but what we’re starting to see is attorneys, politicians, and think tanks [thinking about] what types of laws we need to govern activities in space,” says space historian and editor of collectSPACE.com Robert Pearlman. “There is no one who controls or owns the Moon, so the question is do we wait until there is a colony on the Moon and have them become the governing body?”

If something were to happen on the Moon or inside the International Space Station, the laws of whichever country launched the rocket or the country that owns the module of the ISS the incident happened in, would probably apply. Until there are companies that move completely off planet, Earth legislation would extend to our colonies in space. 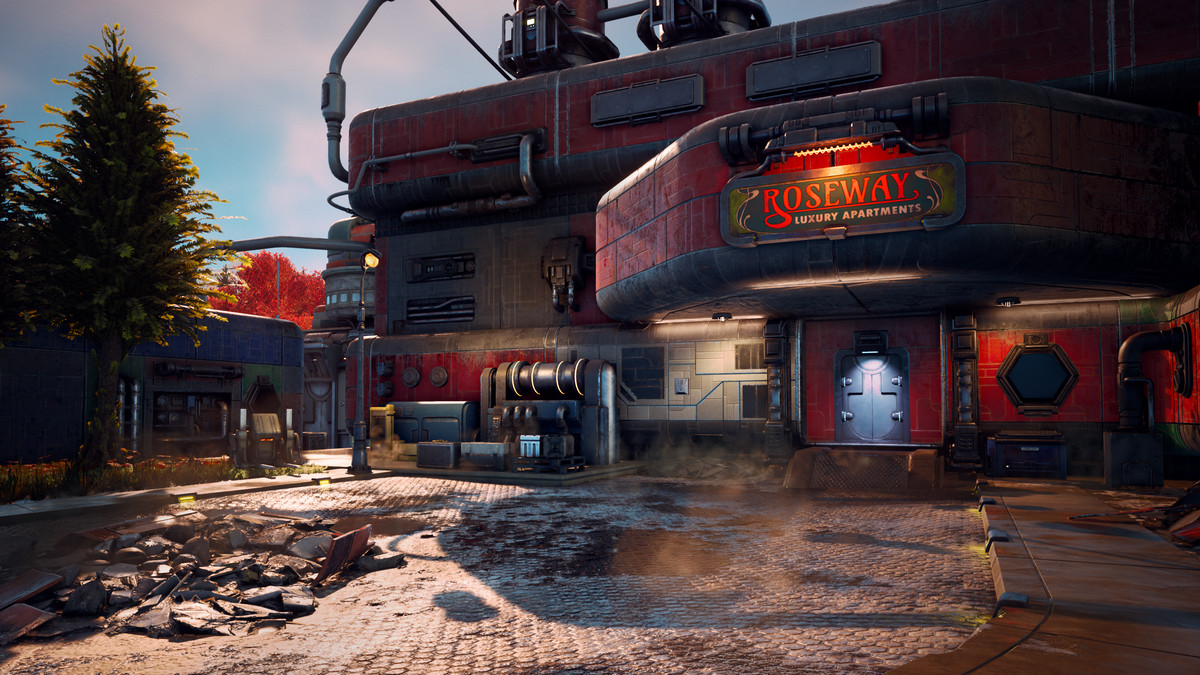 Modern labor laws, at least in the United States, aren’t incredibly strong today. No one is getting killed by a Raptidon while going to work in a warehouse, but negative public perception and anti-union sentiments make the simple act of trying to organize a workplace dangerous. That’s especially true for workers in the tech industry, several of which work with companies that do business in space who are seen as privileged employees who don’t need to unionize. Google, one of the most notable titans in the tech industry, recently fired several employees for trying to organize and even hired a firm known for union-busting late last year.

“Unionizing is antithetical to the goal of most executives, I don’t see that changing in the future,” says Kathryn Spiers, one of the fired Google employees. Throughout the early hours of The Outer Worlds, we see how the corporate facade of the Saltuna Cannery and Edgewater fade away as work slows. Spacer’s Choice employees are treated as second-class citizens, only as valuable as the work they’re able to do. Their lives are effectively owned by the company that owns the city. Some are workers in factories and ports, while others do more skilled work like private security. No matter what they end up doing, they are almost always viewed as replaceable by their employers.

“PEOPLE ARE GOING TO BE A SCARCE COMMODITY IN SPACE.”

Some of the biggest companies in tech, including Google, rely on the manpower of thousands of contractors who work on Google projects but aren’t officially employed by Google. “The way Google uses its contractors is wrong, it’s as if they are a second class of citizens,” Spiers says. “I know many Googlers who viewed contractors as other Googlers and others who didn’t think about Google’s reasons for using contractors, which I believe is to make it harder for their workers to organize.” While some groups of contractors have been able to unionize, others have been fired en masse when Google no longer needed their services. It’s a strong example of how the tech industry doesn’t value the workers who support it.

If companies like SpaceX and Blue Origin were to venture into space today with crewed missions, the final product wouldn’t look anything like Edgewater or Stellar Bay. Musk and Bezos wouldn’t be sending a very large workforce. It’ll be some time before we have people working in mines and canneries on Mars. The cost, risk, and coordination it takes to send and support someone in space are astronomical. Only the most qualified and essential people are heading into the great unknown for the foreseeable future. “Right now on the ISS, the most val