WhenWhen Tae Ha Kim began streaming himself constructing mechanical keyboards on Twitch roughly two years ago, he didn’t think it would be a viable replacement for his San Francisco programming career. And he never imagined it would lead to designing custom accessories for some of the top video game players in the world. But the 24-year-old California native has found a unique niche on both Twitch and YouTube that combines bespoke product design with a growing interest in the broader gaming community for high-end, personalized peripherals like keyboards and mice.

Now, under the banner of Taeha Types, Kim designs and assembles high-priced keyboards on commission by sourcing rare and limited-run components from across the globe. “If you’re a streamer or someone working in the video content creation space, nobody sees what car you drive or what house you live in,” Kim tells The Verge. “But you are showing off the tech you use most of the time. So it makes sense when you think about it. These high profile streamers, gamers, and content creators want to have high-end gear they show off while they’re streaming and doing their jobs.”

How and why I built my first mechanical keyboard

Most recently, Kim put together a custom mechanical keyboard for Turner “Tfue” Tenney, one of the world’s most popular Twitch streamers and among the most famous Fortnite competitors currently playing the game.

Tfue was already a custom keyboard enthusiast, after starting out early on in his Fortnite stardom helping popularize a 60 percent keyboard — a compact model ideal for gaming because of how little space it takes up — called the Ducky One 2 Mini. Tfue graduated from there to more luxury models designed and assembled by a growing community of mechanical keyboard enthusiasts like Kim, who caught Tfue’s eye when he advertised his services in the streamer’s Twitch chat. 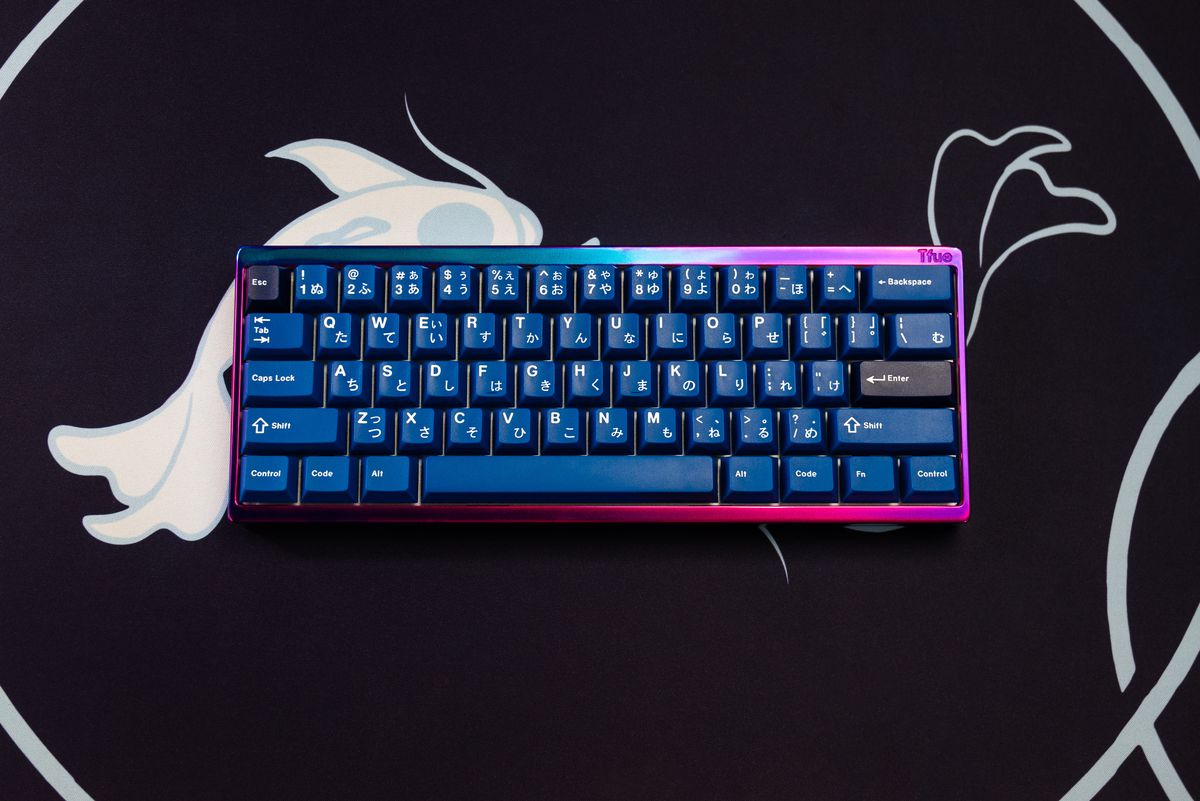 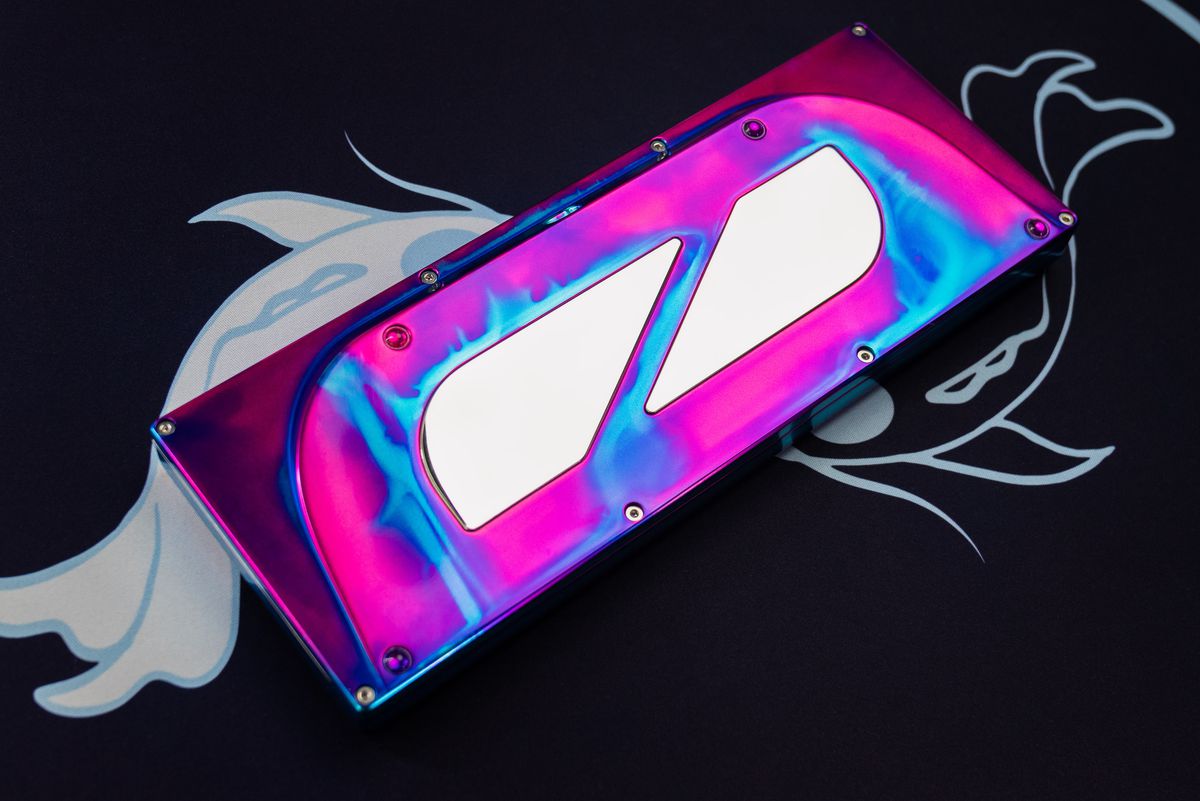 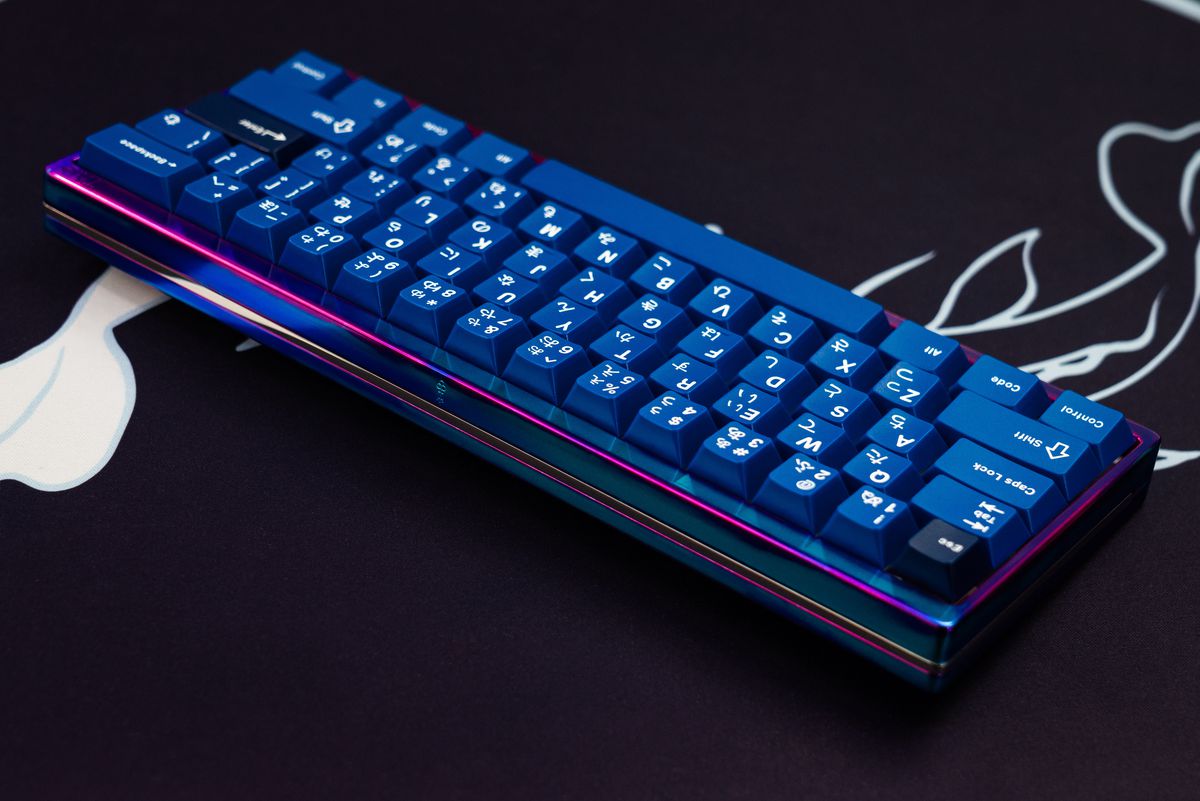 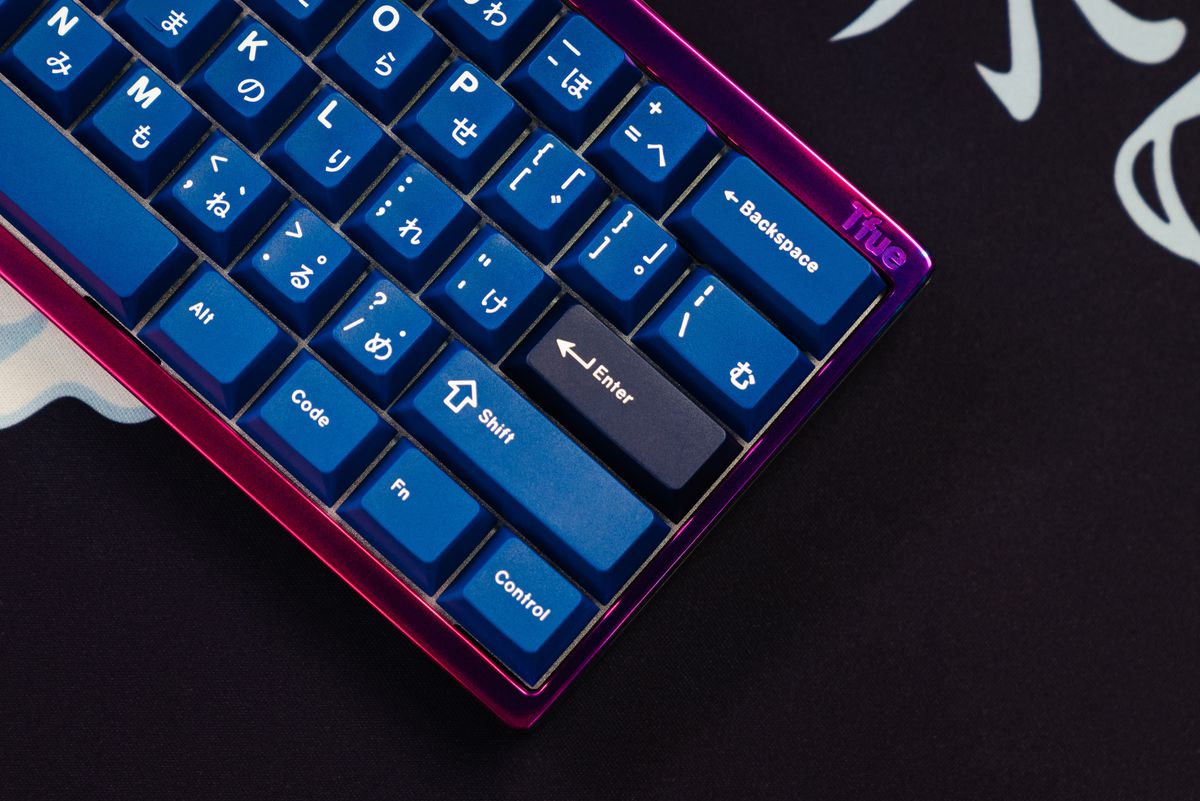 Tfue’s keyboard, also a 60 percent model, features an exotic-looking case, mixing reflective coatings of indigo and turquoise across the bottom. Kim worked closely with North Carolina-based custom keyboard shop Keycult, one of his main sponsors, to get the custom case and circuit board manufactured. He landed on anodized aluminum to achieve a natural gradient color scheme, along with a stainless steel midpiece that gives it a considerable heft.

On top, the keyboard uses popular NovelKeys Cream switches, which feature a light and hypnotizing click sound not unlike that of a spray can being shaken, as one astute commenter and Taeha Types fan pointed out on YouTube. (NovelKeys is another of Kim’s sponsors.) Kim also decided on a GMK Striker keycap set from a Spanish designer known online only as “Zambumon.” The Striker keycaps use the blue hues of the Japanese national soccer team and feature both English and Hiragana characters. The finishing touch is Tfue’s online handle emblazoned in the upper right hand corner of the keyboard.

The whole package — including Kim’s commission fees for coming up with the design alongside Keycult, sourcing the parts, and assembling it — came out to $3,500, Kim says. The design came together over numerous back-and-forths with Tfue to figure out what color schemes he liked and the types of switches and keycaps he was interested in, and Kim then worked with Keycult to make it a reality.

The streamer unboxed the keyboard live on his Twitch channel to nearly 30,000 viewers on Monday afternoon, with a mic held up close so viewers could hear the Cream switches as he tested them out. “This is the nicest keyboard I have ever seen,” Tfue said. “And it’s mine, which makes it even cooler.”

It was another success for Kim, who says his passion is not as much in the keyboards themselves, but in building a platform to talk about, stream, and photograph them. He’s also eager to educate newcomers about the hobby, which he says has only really begun to blow up in the last couple of years.

“It’s very community-driven by individuals who are extreme enthusiasts,” he says. “Now that we’re starting to see this exposure, people are trying to scale up and make it user-friendly.”

The more general interest in these peripherals can be neatly tracked to the rise of e-sports stars and gaming celebrities. Much like how traditional athletes drive interest in everything from jewelry and clothes to shoes and athletic gear, gaming personalities are doing the same for what they wear on stream and the tech accessories they use to play games.

“IT’S VERY COMMUNITY-DRIVEN BY INDIVIDUALS WHO ARE EXTREME ENTHUSIASTS.”

Tfue’s other major contemporary, fellow Fortnite streamer Tyler “Ninja” Blevins, has his own shoe deal with Adidas, and before that he had a signature gaming mouse from the Supreme-like peripheral company Finalmouse, which sells only limited-run batches of products a few times a year in surprise online “drops.” The “Air58 Ninja,” as it was called, was an ultra-light device designed in partnership with the streamer and featured his signature next to the scroll wheel. Countless other big names in gaming have signature PlayStation controllers, gaming PC cases, and other gear fans can buy to show support and, much like wearing the shoes and jerseys of traditional athletes, try and emulate their favorite players.

Kim sits outside this more commercial ecosystem, where he sees himself as more of an expert consultant than a full-blown product designer. He knows the right suppliers to get rare keycaps and switches, and he knows the custom manufacturers that will make one-off parts like Tfue’s anodized aluminum case if he asks for it.

“I’m still not fully into the whole manufacturing space. Most of the custom commissions I do, I work with Keycult, and I have my own network of manufacturers and suppliers I also work with,” he says. “I don’t view myself as a designer or manufacturer per se. I’m more of a broker or middleman that sources specific parts.” 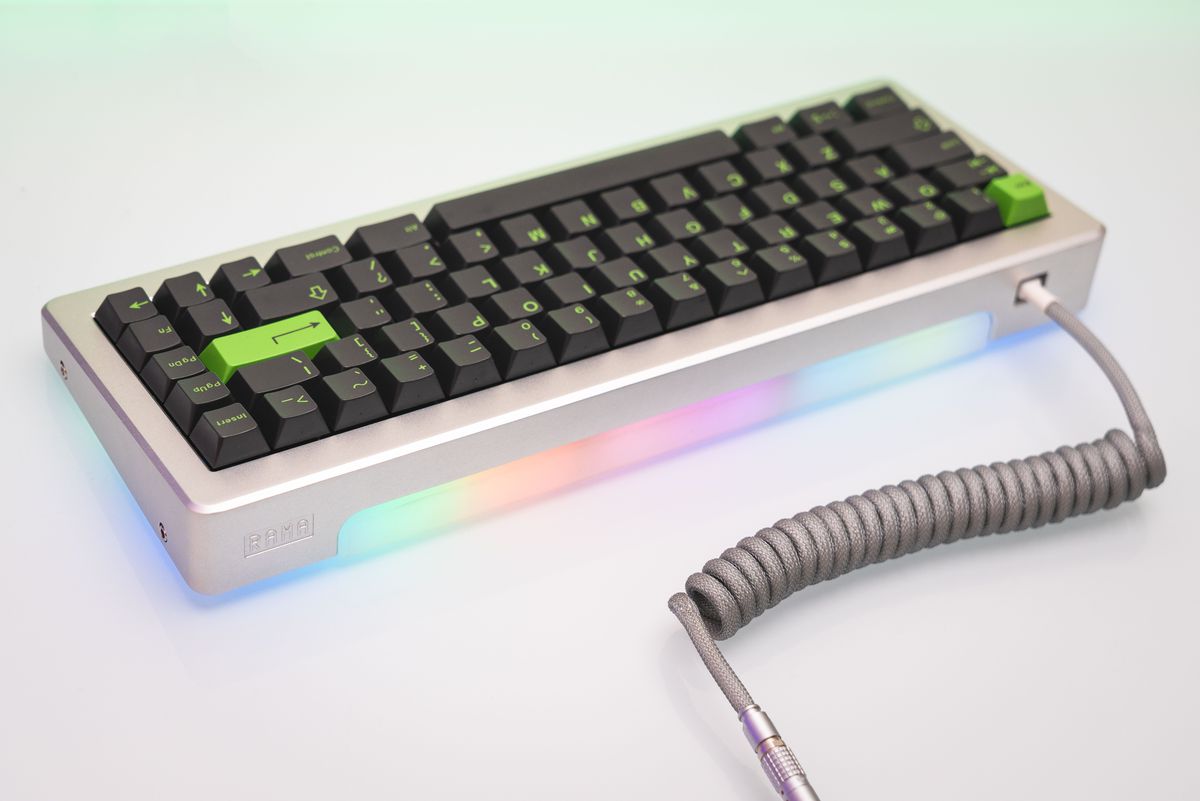 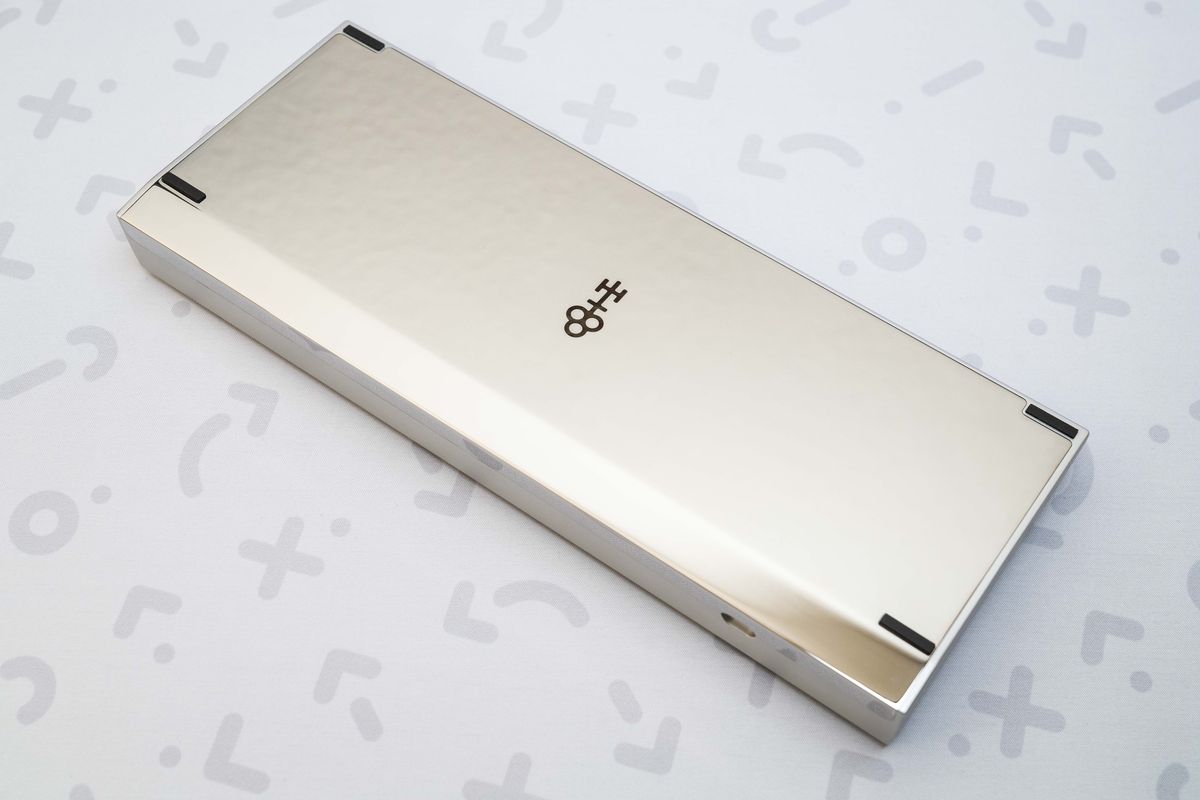 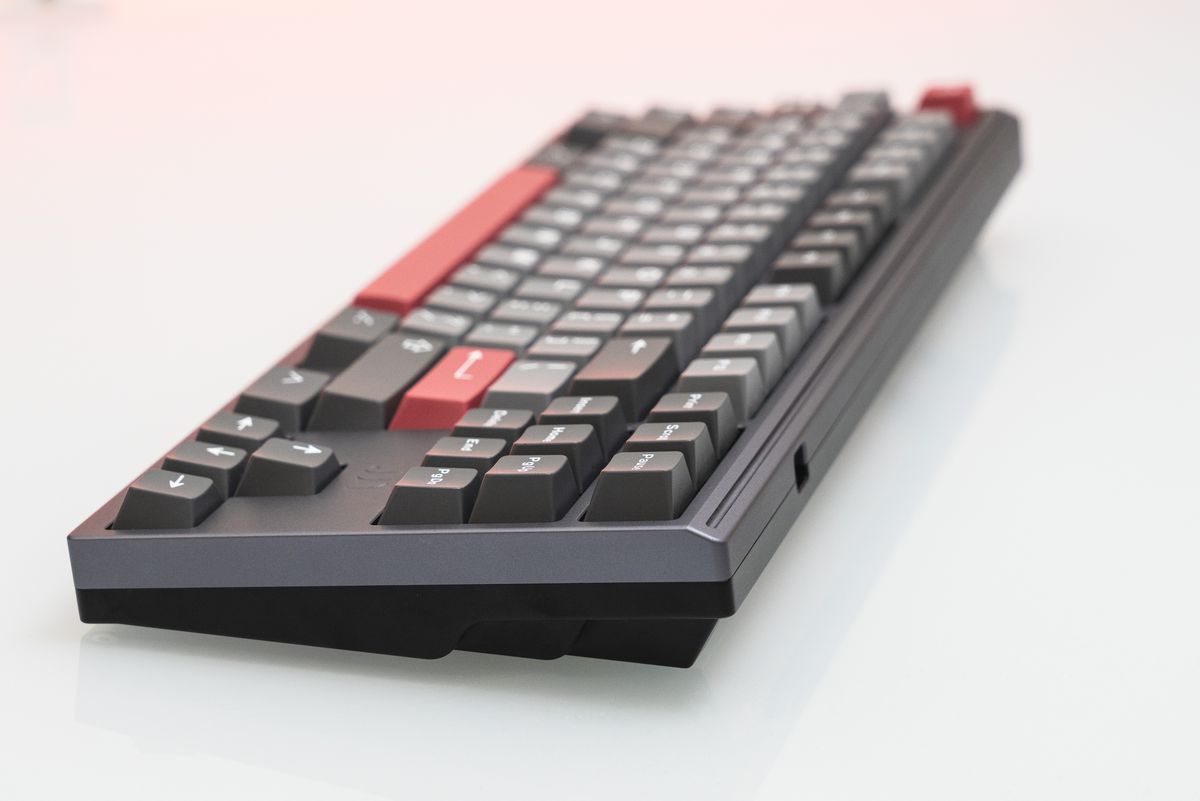 Kim says he doesn’t even make most of his money from commissions. Instead, what’s allowed him to turn keyboard design and construction into a full-time job is his Twitch channel, where he gets donations and subscriber revenue every time he goes live. That’s where Kim sees his future — as a content creator in the ever-expanding mechanical keyboard space.

ONE COMMENTER CALLED KIM THE ‘BOB ROSS OF KEYBOARD MAKING.’

One commenter referred to Kim as the “Bob Ross of keyboard making,” and it’s an appropriate assessment. What makes the videos so appealing is Kim’s steady, soothing narration of the rather technical keyboard construction process. He walks through each step slowly and accentuates the precision involved in, say, soldering the key switches onto the printed circuit board. He also fields live questions from his Twitch chat about his work, the parts he finds, and why he enjoys doing what he does. All the while, light lounge music plays in the background.

To Kim’s surprise, the appetite for this type of content has been quite large. When Kim posted a 16-minute cut of his multi-hour Twitch stream assembling Tfue’s keyboard on January 19th, it immediately blew up. It has since amassed nearly 2 million views on YouTube. Another video of him building a custom keyboard for popular Apex Legends streamer Coby “Dizzy” Meadows last year, featuring the full two-hour and 44-minute live stream from his Twitch channel, has been watched nearly 800,000 times. Kim even makes ASMR typing videos with fully constructed commissions, some of which garner hundreds of thousands of views. Earlier this month, Kim’s channel surpassed 100,000 YouTube subscribers.

Kim says his interest in mechanical keyboards stems not from gaming, but from a lifelong fascination with dexterous tasks, from physical puzzles to sleight-of-hand magic tricks. “As a kid, I was very into speedcubing,” he says, referencing the practice of solving the Rubik’s cube at blazing speed. Another interest of Kim’s was typing. “Typing was a thing I always wanted to be good at and wanted to be better than my friends at,” he says. (Kim now tests his commissioned keyboards with live type tests on Twitch, where he regularly clocks in at more than 120 words per minute.)

But it wasn’t until Kim built his first serious gaming PC in college, at UC Berkeley, that he began “to look seriously into what kind of options there were for a nice keyboard.” That led him to researching various mechanical keyboard communities on the internet. “I was a computer science engineer before I quit to pursue this full time, and I knew ahead of time I would be typing on a desk for most of my life. So I kind of fell into the rabbit hole,” he says. “What really opened my eyes was the mechanical keyboard subreddit. And I just kind of fell in, maybe too deep, I guess.”

“I KNEW AHEAD OF TIME I WOULD BE TYPING ON A DESK FOR MOST OF MY LIFE.”

Kim began Twitch streaming his assemblies while working at IBM in the San Francisco Bay Area. But after six months or so, he had gained a big enough following to begin opening his Taeha Types platform to commissions. Last year, he was earning enough money to feel comfortable ditching San Francisco for Southern California and creating keyboard content full time. He currently lives in Corona, outside Los Angeles, where he has access to a major nexus of Twitch, YouTube, and gaming personalities.

His goal now is to build his Twitch and YouTube channels, and to become a respected source of information on mechanical keyboards that will continue sending big-name streamers his way. “I have always been into photography and videography, maybe even more so than keyboards,” he says of focusing on his channels. “And there’s a huge lack of information I’m hoping to fill in just making YouTube videos.”

One day, though, Kim says he hopes his expertise will let him transition from sourcing the parts and assembling the overall keyboards to actually designing components himself. “For the near future, I think I’ll still remain a content creator,” he says. “But because I have more experience, I would love to get into product design myself.”