Greenpeace criticises pledge from airlines, airports and manufacturers as ‘greenwash’ 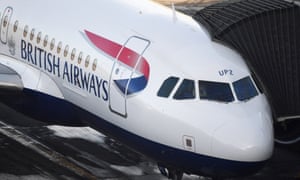 The UK aviation industry has pledged to cut its net carbon emissions to zero by 2050 – despite still planning for 70% more flights over the next three decades.

Members of the Sustainable Aviation coalition, which includes most major airlines and airports, as well as aerospace manufacturers, will sign a commitment to reach net zero by mid-century. More than a third of the proposed net reduction will be achieved through offsetting.

A “decarbonisation road map” will be published outlining how aviation can cut its carbon footprint – replacing a previous road map that only committed the industry to halving emissions over the next three decades.

The plan sets out potential reductions coming from smarter flight operations, and new aircraft and engine technology – including some yet to be invented. Modernising airspace and developing sustainable aviation fuels will also contribute to reducing pollution.

About 25.8 million tonnes of CO2, out of 71.1 million tonnes set to be created annually by the UK sector, will need to be addressed through what Sustainable Aviation calls “market-based measures”, or offsetting.

The coalition forecasts that sustainable jet fuels, which are yet to be employed commercially, could meet almost a third of UK’s aviation fuel demand by 2050.

The transport secretary, Grant Shapps, described the commitment as a huge step forward in creating a greener future. He added: “Aviation has a crucial role to play in reducing carbon emissions, and with the help of new technologies, renewable fuels and our continued international cooperation … we’ll be able to strike that balance.”

Neil Robinson, the chair of Sustainable Aviation, said: “Climate change is a clear and pressing issue for people, businesses and governments across the world. We know aviation emissions will increase if decisive action is not taken, and that’s why UK aviation today commits to achieving net zero carbon emissions by 2050, through an international approach, working with governments around the world and through the UN.”

However, Greenpeace dismissed the move as “greenwash”. John Sauven, its UK executive director, said: “This whole strategy is a flight of fancy. Carbon offsetting is simply an excuse to carry on with business as usual while shifting the responsibility to cut emissions to someone else, somewhere else, and some other time. It’s greenwash pure and simple and ministers should be wary of lending it any credibility.”

British Airways’ owner IAG has already committed to net zero carbon emissions by 2050, while easyJet has gone further by already offsetting all flights.