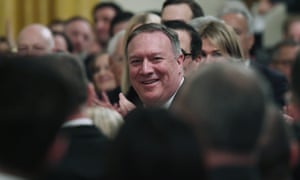 Britain has a chance to “relook” at its decision to allow Huawei into its 5G phone network in the future, the US secretary of state, Mike Pompeo, declared as he flew to London for a two-day visit to the UK.

The senior member of Donald Trump’s administration told reporters that the US believed that deploying Huawei in the UK created “real risk”, and insisted that sensitive American information should travel only through “trusted networks”. 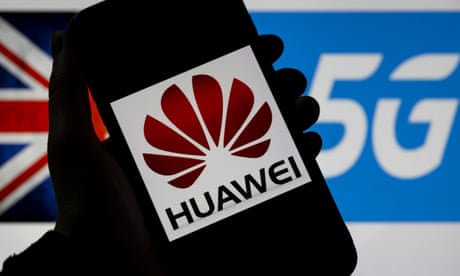 UK Huawei decision appears to avert row with US

But Pompeo added that the US was not yet clear about the practical implications of the British decision to allow Huawei a limited role in 5G and he wanted to discuss with his British counterparts what to do next.

“We’ll evaluate what the United Kingdom did. It’s a little unclear precisely what they’re going to permit and not permit, so we need to take a little bit of time to evaluate that.

“But our view is that we should have western systems with western rules, and American information only should pass through trusted networks, and we’ll make sure we do that,” he said, speaking to US reporters on the way to the UK.

When pressed about whether the US would reduce intelligence sharing as a result, Pompeo said it would depend on how the UK implemented its proposals, before making it clear that there would be a chance for Britain to change its mind.

“There’s also a chance for the United Kingdom to relook at this as implementation moves forward,” the secretary of state told reporters on the way to begin a two-day trip during which he will meet the prime minister, Boris Johnson, and his the foreign secretary, Dominic Raab.

The secretary of state emphasised that work was being done between the two countries “to make sure that there are true competitors to Huawei” so that “we can deliver true commercial outcomes across real secure networks that aren’t subject to the Chinese Communist party’s control”.

The UK is hoping it has blunted the sharpest of Washington’s criticisms, as it announced it would allow Huawei to supply 5G network equipment subject to a 35% market share cap for each of Britain’s four phone companies.

The White House had lobbied hard for a total ban, claiming there was a risk the Chinese state could exploit Huawei equipment to conduct surveillance. But Britain’s spy agencies believe any risk can be contained as long as Huawei’s involvement is limited.

Boris Johnson spoke to Trump on Tuesday afternoon shortly after the proposal was announced, and apparently emphasised collaborating to develop alternatives to Huawei, a sentiment partly reflected in Pompeo’s remarks.

British intelligence officials also say that UK-US intelligence sharing is conducted via specially encrypted communications channels and that no Huawei equipment has ever been involved on the UK side.

Welcoming Pompeo, Raab said there should be room for differing opinions on the Huawei issue, adding: “As close friends the UK-US relationship has a maturity that we can be confident enough to have candid conversations on the odd elements on which we disagree.”

Pompeo’s visit, coinciding with Britain’s legal exit from the European Union on Friday, might be seen as a chance for the US to underline the UK’s new dependence on US.

But Raab is also expected to stress that he did not see Brexit as marking the end of Britain’s relationship with the EU. He is arguing the E3 format – Germany, UK and France - had already been working on Libya and Iran, and along with Nato and the Council of Europe.

He said “we have got a great opportunity to show Europe that we will not be weaker but better neighbours, allies and partners”.

Raab, a leading Eurosceptic, is eager to explain to Pompeo that UK foreign policy after Brexit will not simply be about relationship with three power blocs, EU, US and China, and will instead be viewed as a chance to forge stronger bilateral relations with countries such as Norway and Canada, as well as in Africa and the Asean economies.

He said: “We have got a chance to turn the page as a country, lift some of the economic uncertainty and bring the country together. Global free trade would be a chance to address the UK’s productivity problem.”

Raab, following the lead of the US Treasury secretary, Steven Mnuchin, is eager to start US trade talks in tandem with the EU trade talks, even if no US trade deal can be secured until an EU deal is complete.

The UK is also expected to tell Pompeo that it is not joining the US maximum economic pressure campaign against Iran, but will point to the British diplomatic heavy lifting that led the EU three to agree to put Iran on notice by putting the Iran nuclear deal into its dispute resolution mechanism, a potential first step to withdrawing from the deal later in the year.

Raab is also expected to raise with Pompeo the continued refusal of the US to extradite Anne Saccolas, the wife of the US diplomat, charged with causing the death of 19-year-old motorcyclist Harry Dunn.

One source said “we are not rolling over on this”, even if in practice there is little that government can do if the US does not comply.